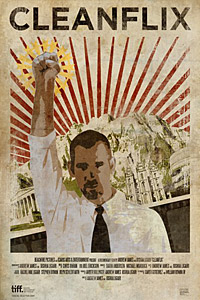 Cleanflix (Directors: Andrew James and Joshua Ligairi): The Mormon religion forbids its adherents from watching R-rated movies, but Mormons desperately want to see the films that everyone else is talking about. This moral quandary created what looked like a golden business opportunity for a group of Utah entrepreneurs. Beginning in 2000, Ray Lines began using computer software to digitally remove offending scenes from DVDs. His edited versions of the movies were a hot seller and soon his business, Clean Flicks, was growing wildly. At its height, he owned 10 video stores and supplied another 70. He even moved the business online, selling off the stores to a number of different people. Daniel Thompson bought several of the stores and seemed to be the most successful. But after the Directors’ Guild of America filed suit against Clean Flicks and its operators, these businesses were living on borrowed time. When the case was finally settled in 2006, they were forced to close down.

But quite a few carried on. They simply found other companies to do the editing and bought their movies from them. Among these outlaws was Thompson. He simply felt that the market demand was overwhelming, and business was too good. He continued operating under what he saw as a legal loophole, which allowed educational use of copyrighted material. But his penchant for seeking the spotlight only brought unwanted attention to Flick’s Club, the editing company he was using, and they were soon ordered to shutter their operation. To make things worse, within a few months of his own business closing down, Thompson was charged with paying a minor for sex. The irony of someone operating a business which offered sanitized movies to a religious clientele being involved in such scandalous behaviour was not lost on the local media, whose attention Thompson no longer wanted.

The directors of Cleanflix faced the not-uncommon documentarian’s dilemma of having to deal with a changing story. Unfortunately, it’s led to the fracturing of their film into two pieces. The first half is an engrossing film about issues of censorship, intellectual property, and an examination of Mormon cultural mores. The second half is a voyeuristic look into one man’s moral failings. In my opinion, the effort to meld them into a coherent film is only partially successful. It’s unfortunate that Thompson’s downfall seemed to be greeted with such glee by the smugly liberal audience. I don’t think the filmmakers’ intention was self-righteous, and the “comeuppance” angle blunted the impact of several interesting issues, which remained unresolved.

For instance, I’m curious how the “fair use” copyright activists who advocate for the freedom to “mash up” intellectual property feel about editing Hollywood movies to remove objectionable content. I was also fascinated by the cultural phenomenon of religious people trying to get around the letter of the law so they can say they’re watching the same films as the rest of America, even when they’re not. I can appreciate how Thompson’s failures as a human being illustrate the futility of trying to protect people from bad external influences, but by letting the audience see him as the villain, Cleanflix shouts when it might have whispered.

Here is the Q&A with directors Andew James and Joshua Ligairi from after the screening: