This Hour Has 22 Minutes: Season One on DVD 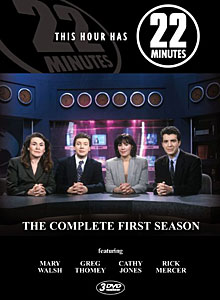 This Hour Has 22 Minutes: Season One: The good folks at Koch Canada sent me the newly-released first season of Canada’s greatest political satire this week. This Hour Has 22 Minutes began broadcasting way way back in 1993 when Kim Campbell was (briefly) our Prime Minister and we were in the thick of an election campaign. Four Newfoundlanders (the impossibly young-looking Rick Mercer, Greg Thomey, Cathy Jones and Mary Walsh) attacked current events each week in a way which had Canadians spewing our maple syrup. The first season launched such memorable characters as Jerry Boyle and Marg Delahunty, and gave us a glimpse of the huge talent that the group would continue to develop over the next decade. Sadly, though the show is still on the air, most of the original cast has moved on (although Rick Mercer still has his own weekly political satire show on CBC). Much like another institution of Canadian political comedy, the Royal Canadian Air Farce, things tended to get stale after about a decade, so it is refreshing to watch these early episodes, when I’m sure they made a lot of CBC executives nervous.

If I have any complaints about the DVDs themselves, they would have to include the rather hideous menu screens and, more importantly, their absolute lack of any special features. It would have been very interesting to have some commentary from the now older and (presumably) wiser members of the group.

Season Two is also available but I’m not certain what plans there are, if any, for the rest of the show’s run. I suppose it will depend on sales. Despite the bare-bones presentation, the set is a steal at MSRP $32.99. It includes all 21 half-hour (er, 22-minute) episodes.