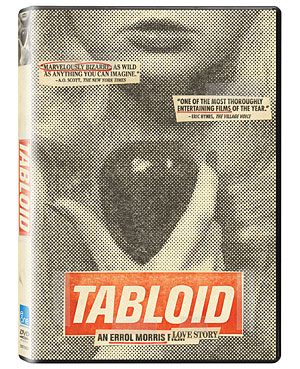 eOne released Tabloid on DVD in Canada on November 1, 2011. Help support Toronto Screen Shots by buying it on Amazon.ca.

Tabloid (Director: Errol Morris): Joyce McKinney first came to the attention of director Errol Morris back in 2008 when she paid a huge sum to a Korean lab to have her beloved dog Booger, recently deceased, cloned. As interesting as that story was, it was nothing compared to Ms. McKinney’s earlier exploits. Back in the late 1970s, she’d been a tabloid sensation in the UK due to her involvement in a bizarre kidnapping plot involving a Mormon missionary. Ex-beauty queen McKinney claimed that her boyfriend Kirk Anderson had been brainwashed by Mormons and taken to England against his will, and that she was simply setting out to rescue him. But the rescue involved a fake gun, chloroform, and Anderson’s confinement (involving either ropes or chains, depending on the source) in a rural cottage where he was raped over a period of several days. McKinney’s version reads much more romantically. She took Kirk to a “honeymoon cottage” where they cooked meals and made love. She wanted to take him to a “quiet” place where she could essentially deprogram him from what she considered the cult-like indoctrination that was keeping them apart. She was eventually arrested and charged, and as the story emerges, the British papers had a field day. After three months in custody, she was granted bail along with her accomplice Keith “KJ” May, and they promptly fled the country, disguised as deaf-mutes. To hear her describe it today, it all sounds like a lark, rather than criminal behaviour.

Once back in the US, she contacted one of the tabloids, the Daily Express, to sell her story. Meanwhile, its competitor, the Mirror, was attempting to dig up some dirt on the woman loudly proclaiming her innocence. And boy did they succeed. I won’t spoil any more of the film’s many entertaining surprises, but I promise you that you’ll be riveted. And that’s surely Morris’ intent, but I believe he’s also very consciously implicating all of us in a continuing tabloid story. Why do we love these kind of lurid tales, and what makes us so happy to see someone pour out details of their life that any rational person would keep private? It’s interesting to note that although Joyce McKinney participated readily in the film’s production, she’s since disavowed it, going so far as to turn up at some of the film’s festival screenings to dispute certain aspects of her portrayal.

And that’s where the film makes me a bit uncomfortable. McKinney is charming and a born storyteller, perfectly happy to explain her side of the story, and sounding reasonable most of the time. But as I continued to watch, it became more and more clear that she’s almost certainly mentally ill. Her obsession with the romantic fantasy of Kirk being “the one” for her has condemned her to a lonely life where this bizarre tale is her only narrative. She has the likeability of most professional liars, and when parts of her story don’t add up, she simply throws another curveball to distract us. At one point, referring to Kirk’s supposed brainwashing, she says, “you can tell a lie often enough that you believe it.” It’s all terribly sad, and I wonder if Morris should have simply let this story, great as it is, go past him.

On the other hand, it’s a chance to have a discussion about these kinds of issues. Are films and stories like this exploitative, or are they simply a part of human experience? I’m sure Joyce McKinney, no matter what she claims after the fact, was delighted to be able to tell her unforgettable story to a whole new audience, and sad as it may be to give any more attention to something that happened so long ago, she seems to relish the opportunity to revisit it. It’s both unfortunate and completely understandable that the Prince Charming in her romantic fable, Kirk Anderson, has refused all requests for interviews over the years. He’s busy living a regular guy’s life.

This entry was posted in Documentaries, DVD and tagged scandal. Bookmark the permalink.