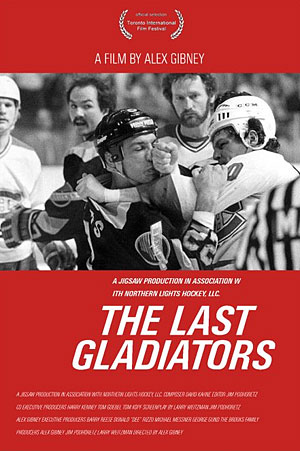 The Last Gladiators (Director: Alex Gibney): Filmmaker Alex Gibney is clearly a very busy man. The Last Gladiators, in which he examines the world of National Hockey League pugilists, focussing in on the story of former Montreal Canadiens enforcer Chris “Knuckles” Nilan, is his tenth feature film since 2005, an unusually prolific output for a documentarian. And you can add in a couple of shorter segments he contributed to some other collaborative documentary projects during that period. Gibney has a track record for matching the quantity with quality, as his latest film proves, even if it’s a departure from the kind of politically-charged topics he’s best known for, such as the downfall of politicians (Client 9: The Rise and Fall of Eliot Spitzer and Casino Jack and the United States of Money), corporate malfeasance (Enron: The Smartest Guys in the Room), and American military torture (Taxi to the Dark Side, which won an Oscar in 2008 for best documentary feature). But as a lifelong hockey fan, Gibney, an American, saw rich source material in examining the subculture of one of the most controversial aspect of Canada’s game, with Nilan’s own intriguing story providing about 75% of the film’s content.

Retiring in 1992 after being plagued by injuries (he’s undergone 26 surgeries), Nilan’s most notable achievements from his 13 year NHL career are more than 3,000 penalty minutes, a Stanley Cup win with the Canadiens in 1986, and a selection to Team USA for the 1987 Canada Cup series. After being drafted by Montreal, he played nine seasons for them before being traded to the New York Rangers and eventually his hometown Boston Bruins, before ending his career back with Montreal. Nilan’s pride and love for the Canadiens still runs deep and it seems as if he never got over the devastation of being traded away from them. His troubled post-NHL history, which proves to be the most substantive part of the film, could make Nilan the poster child for pro athletes who struggle with their post-playing lives. A toxic combination of substance abuse (alcohol, prescription painkillers, and heroin), employment problems (Nilan hated the insurance job he worked at), and legal troubles (including a 2009 arrest for shoplifting) destroyed his relationship with his wife and child and nearly killed him. Nilan, who has a very dark and intense side, may be a rough-around-the-edges character, but he’s still a likeable one. Part of his appeal is his blunt honesty, openness, and a willingness to take full responsibility for his failings. Interviews with his father who, like his son, projects a hard-ass demeanour and speaks with that always-fascinating thick Boston accent, add real emotional depth to the film, as the senior Nilan holds little back in conveying the profound heartache and shame he felt (and still feels) over his son’s struggles.

The non-Nilan portions of the film find Gibney tracing the evolution of the enforcer’s role in the game from its mid-70s heyday with the Philadelphia Flyers’ “Broad Street Bullies” through to its greatly diminished need in the current game. Numerous interviews with the most prominent fighters over the past couple of decades provide insight into the enforcer mindset, with players like Marty McSorley, Tony Twist, Donald Brashear, and the late Bob Probert weighing in (Probert’s interviews, conducted shortly before his death, are sad to watch). The scenes with Brashear are sad for a different reason, as we see the former fan favourite playing in D-list hockey league games and still itching to drop his gloves.

The Last Gladiators is a timely piece in light of the recent deaths of three NHL enforcers that called into question the possible link between their occupations and its negative residual effects on their lives. Nilan, who I heard give an interview on Toronto’s Prime Time Sports radio show the week before The Last Gladiators‘ TIFF premiere, discounted the connection. Nilan’s stance apparently escaped the attention of TV’s Hockey Night in Canada neanderthal Don Cherry, who criticized him and two other former fighters (also without basis) on the telecast for supporting the supposed theory.

Gibney, who began filming a general portrait of hockey fighters, chose wisely in deciding to make Nilan the central subject. The Last Gladiators is consistently gripping and only misfires when the director chooses some disappointingly obvious music on the soundtrack (Steppenwolf’s “Born To Be Wild”) or engages in unnecessary scene re-enactments to advance his narrative, dragging the documentary into cheesy E! True Hollywood Story territory. Being a hockey fan isn’t even a necessary component in appreciating the film, as I haven’t given a toss about the NHL since the inept Toronto Maple Leafs killed my love for the game in the mid-90s.