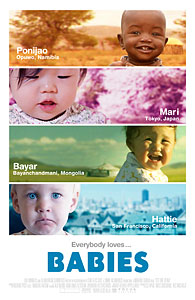 Babies (Director: Thomas Balmès): I’d been enchanted by the trailer since I first saw it a few months ago. Described by its producer and originator Alain Chabat as “a wildlife film [about] human babies,” this documentary observes four babies in different parts of the world as they grow from birth to their first steps. Ponijao from Namibia and Bayarjargal from Mongolia live in wide-open rural environments while Mari from Tokyo and Hattie in San Francisco grow up in more structured urban settings. The film is strictly observational; there is no voiceover and any parental dialogue is purposely kept in the background. What the film accomplishes well is to allow us to compare these four developing infants and note the similarities and differences in their growth. We also get to see differences in parenting styles, which gives the film some of its humour. For instance, the rural kids seem much more free to explore their environments and their relationships with animals grow out of necessity, since their families’ livelihoods depend on livestock. While the urban parents seem more involved in their children’s lives, there are fewer opportunities for unstructured play and accidental discoveries.

The different locales are all visually interesting and the static cinematography and long scenes allow the audience to immerse themselves in the perspective of each baby. Since the focus in each scene is on the baby, and never on the parents, you come to feel you’re actually watching each character grow and change as the film progresses.

While I thoroughly enjoyed Babies, I think it may be challenging for some audiences. To put it bluntly, I think the actual film may seem too highbrow for a mass audience while the basic concept may turn off the arthouse audience as too commercial. Which isn’t to say it won’t make bags of money, at least for a documentary. But some of my colleagues found it boring, and lost patience with its long scenes and rather linear narrative arc. Mind you, none of them are parents. Neither am I, for that matter, but I found the children charming and was fascinated to see them literally figuring out problems as we observed. I think the “cute” factor will draw a lot of people on the film’s opening weekend, but its slow pacing and lack of dialogue may lead to some less-than-positive word of mouth, which would be a shame. For the patient and child-friendly viewer, Babies delivers its fair share of rewards.