Posted on January 25, 2010 by James McNally
Editor’s Note: Top Gear Seasons 11 and 12 were released on DVD in the US and Canada on January 12 by Warner Brothers. You can help Toronto Screen Shots by buying from Amazon.ca or Amazon.com.

I don’t own a car. In fact, I don’t even drive. That hasn’t diminished in the slightest my passion for this show. Broadcast originally on BBC, and now a hit on this side of the pond on BBC America and BBC Canada, this show about cars might possibly be the best thing on television.

On the air since 1978, it’s been hosted since 1988 by the curmudgeonly Jeremy Clarkson. He’s ably assisted by tall hippie James May (often called “Captain Slow” by his colleagues) and the diminutive Richard Hammond (occasionally referred to as “Hamster”). The chemistry between the hosts is about 80% of the secret to the show’s success, with the centrepiece of each episode consisting of a series of vehicle-related challenges in which the trio can compete against each other. Some highlights include the three racing each other in trucks and city buses.

Other popular segments are the “Star in a Reasonably-Priced Car” (in which a celebrity is interviewed after completing a lap of the racetrack in a “regular” car) and those involving the masked race driver known only as The Stig. This anonymous pro takes out an endless procession of fancy cars week after week and tries to complete the fastest lap of the Top Gear track. In this way, models are rated against each other and argued about endlessly by the hosts.

Perhaps the best thing about the show is that it makes not a bit of difference that none of the models featured on the show are even for sale in North America. Nobody in Britain can afford these cars, anyway. Top Gear is the ultimate vicarious thrill show. We can watch a crew of foul-mouthed wisecracking lunatics tear around a race track in ludicrously expensive cars and we’re satisfied. The camerawork is dazzling, and the descriptions of the cars are over the top, which is also part of the fun.

It’s simply a joy to see these guys having so much fun at their jobs. The interviews are also great, because they put the celebrities into unfamiliar territory. Behind the wheel of a car and racing around a track, they don’t seem that much different to us after all. Well, except for me. I can’t drive. 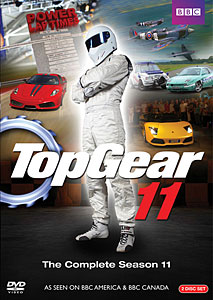 This entry was posted in DVD, Television and tagged bbc, cars. Bookmark the permalink.