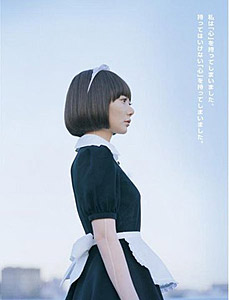 Air Doll (Kûki ningyô) (Director: Hirokazu Kore-eda): The premise of Air Doll seems silly at best, salacious at worst: an inflatable sex doll comes to life. In the hands of another director, the resulting film would probably have been a standard sex comedy. But Kore-eda, whose previous TIFF appearances have been with thoughtful films like Still Walking and Nobody Knows, turns the film into an absolutely captivating meditation on what it means to be human.

One morning, Nozomi, a “sex substitute”, finds that she has acquired a heart. Puzzled, she dresses herself in the maid’s outfit her owner has bought for her, and ventures out. By mimicking the speech and actions of her neighbours, she learns to fit in, and she soon lands a job working at a video store, where she begins to fall in love with her co-worker. Casting the wonderful Bae Doo Na (Linda Linda Linda, The Host) was a stroke of genius. Her wide-eyed wonder at everything in the world is beautiful to watch, and the scenes of her joyfully discovering everything around her put a big smile on my face.

Though she is “owned” by a lonely waiter, he doesn’t realize what has happened and eventually buys a replacement doll. One of the big themes of the film is the idea of substitution and replacement, that in a big and impersonal city like Tokyo, it’s easy to feel unimportant. Kore-eda assembles a supporting cast of neighbourhood characters who are all struggling with loneliness; the old man who sits on the park bench, the single father of a young daughter, the middle-aged hotel clerk worried that a younger woman will soon replace her, the bulimic young woman who refuses to work on her parents’ apple farm. Unfortunately, our interactions with these characters is fleeting, giving a climactic scene near the end a little less impact than I think it should have. As well, a few narrative threads are confusing which momentarily pulls us out of this lovely fable.

Bae Doo Na is absolutely fearless in her performance, whether she’s naked physically or emotionally. When the joy of discovery inevitably gives way to the pain of rejection and “replacement,” I was never less than mesmerized by her performance and her beauty. The film takes a turn for the tragic, as might be expected, but the ending is actually somewhat upbeat, and throughout, Kore-eda powerfully reminds us that we are not meant to be alone in this world. Visually beautiful and with a beating emotional heart, just like Nozomi, Air Doll is definitely a film I’m eager to catch again soon.

This entry was posted in Film Festivals, TIFF and tagged #tiff09, japan. Bookmark the permalink.