Posted on September 6, 2008 by James McNally 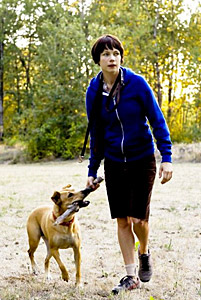 Wendy and Lucy (2008, Director: Kelly Reichardt): I had heard a lot about Kelly Reichardt after her last film Old Joy won both critical acclaim and a number of awards. Though I still haven’t seen it (what? another film I haven’t seen? someone’s about to revoke my film blogger’s union membership soon!), I’ve been led to believe it shares a similar slow and meditative pace with her latest film. But while Old Joy examined the nature of male friendships, Wendy and Lucy explores darker territory. Michelle Williams plays Wendy Carroll, a young woman on her way from Indiana to Alaska, where she hopes to pick up a well-paying job in a cannery. Though we get hardly any backstory, it’s clear that Wendy is from a poor family and has a limited education. We watch as she carefully tallies her cash and keeps a record of her spending. She’s very much alone on this journey, except for her dog Lucy, who seems more like a family member than anyone she’s left behind. An unlucky car breakdown in a small rural town in Oregon leads to a disastrous chain of events that tears away the shockingly thin sense of security Wendy clings to. First she loses Lucy, and then has to leave the car in for repairs. In one fell swoop, she’s lost her family and her home (she’d been saving money by sleeping in her car). It’s very clear from Reichardt’s film how profoundly rural life has changed in the last fifty years or so. Everyone she encounters is either indifferent or hostile, with the exception of a fatherly security guard, and even his modest attempts at kindness seem creepy in light of the town’s overwhelming inhospitality. So much for the kindness of strangers.

Despite the relative lack of dialogue, there are a few choice lines in the script. A supermarket employee sneers, “If a person can’t afford dog food, they shouldn’t own a dog.” And when Wendy asks the security guard for change to use the payphone, he hands her his cellphone instead, observing that “no one uses a payphone anymore.” I’ve been reading a lot of James Howard Kunstler’s books lately, and his critique of suburbia rings very true in this film. Car culture has destroyed our sense of community, and technology has only succeeded in separating us from our neighbours. Wendy has been told by her government that she’s on her own, that she should pull herself up by her own bootstraps, and she is willing to try. But what if something unexpected happens. Don’t we all need a little help sometimes? The thought that kept running through my head was that if this could happen to a pretty white girl with a cute dog, then what about a Hispanic single mother, or a black man? These are the people who are struggling right in front of our eyes, and our indifference or hostility is condemning them to difficult and lonely lives.

Michelle Williams is never less than compelling in this unglamorous role. I’d been impressed with the depth she brought to her supporting role in Brokeback Mountain, but here she’s in every frame. Her stoicism and determination barely cover her vulnerability and loneliness. In one scene, she’s confronted in the middle of the night by a deranged homeless man. As he demands she keep silent, her eyes express the terror of not knowing whether she’ll live or die. After he leaves, she quickly gathers up her things and runs back into town. As she enters a gas station restroom, her breakdown is heart-wrenching. The film’s ending is ambiguous, which under the circumstances is the best way it could have ended. People like Wendy are survivors, and with or without friendship or support, they’ll go on. Hopefully, this portrait of one of the “invisible” poor among us will help us to pay a little more attention.

Here is the Q&A with director Kelly Reichardt from after the screening:

This entry was posted in Film Festivals, TIFF and tagged #tiff08, poverty. Bookmark the permalink.

2 Responses to Wendy and Lucy