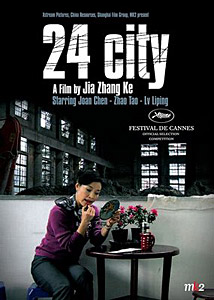 24 City (2008, Director: Jia Zhang-ke): Despite my best intentions, I have yet to see a film from the man some critics are now cheekily referring to as “Jay-Z.” Known for films like The World (2004), Still Life (2006) and Useless (2007), Jia explores the seams between China’s ancient traditions and the dizzying pace of modern life in the world’s most populous nation. In this, his latest film, he mixes documentary filmmaking with fictional storytelling to weave together a larger narrative involving the workers of a venerable military factory which is now being turned into luxury condos in the southwestern city of Changdu.

Since this was my first exposure to Jia’s work, I can’t say for certain that it’s representative of his style, but I sure hope so. Essentially the film is a series of monologues framed in long or mid shots interspersed with stately pans over the factory buildings. His patient camera demands that we pay attention to what we’re looking at. While some of the fictional stories are slightly more melodramatic, all of the workers’ recollections are moving. Combined with the reverential camerawork, Jia makes a poignant statement about the dignity of work. 24 City is an elegy for a way of life many in China are eager to leave behind, but in many ways it’s simply about the passing of time and about the way individuals have little control over it. Even though their work seemed crushing in its monotony, sinister in its purpose and at times overwhelming in the demands it placed on the workers’ lives, all of them seem to miss it. Or rather, they miss the small tragedies and romances that flourished and then faded, along with their youth, just like the factory itself. Lovely stuff.

This entry was posted in Film Festivals, TIFF and tagged #tiff08, china, work. Bookmark the permalink.