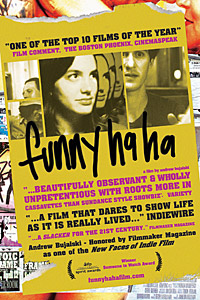 Funny Ha Ha (2002, Director: Andrew Bujalski): Perhaps the first of the films later lumped together as “mumblecore,” Funny Ha Ha was written and directed by 27-year-old Harvard film graduate Andrew Bujalski. Made on a shoestring budget with non-professional actors, it toured film festivals for almost three years before getting a limited theatrical release in 2005. I believe this is the first time the film has screened theatrically in Toronto.

Marnie (Kate Dollenmayer) is a recent college graduate still living in the student ghetto near her school. Though she’s no longer a student, she seems unable to move on to the next phase of her life. She still hangs around with her college friends, partying and working temp jobs. Her obsession with her friend Alex is obvious to everyone, despite the fact that he’s already in a serious relationship. Nonetheless, when she hears Alex has broken up with his girlfriend, she’s reluctant to make her feelings known, despite the urgings of all her friends, including Alex’s sister. She meets another guy, Mitchell (Bujalski), at her temping job and he awkwardly asks her out. Then her friend Rachel’s boyfriend Dave kisses her drunkenly after a party. None of these relationships are going the way she wants. She quits the temping job and finds a better one as a research assistant. Alex begins hanging out with her and flirting ambiguously. Then suddenly she finds out he and his girlfriend have not only reunited, but eloped and gotten married. But he still shows up drunk late on the night of her birthday. “Marriage is complicated,” he says.

With prospects like these, Marnie clearly needs to get away from these people and maybe even this town, and by the end, we get an inkling that that’s what is going to happen. But for about 90% of the film’s running time, we float through Marnie’s life just the way she has. What saves it from being completely tedious is Dollenmayer’s open and pretty face, and her gradually increasing determination to move on with her life.

Funny Ha Ha is extremely primitive, with no music and no external lighting. As my colleague Bob Turnbull expressed, it’s almost a Dogme 95 film. But there’s plenty of humour, of both the goofball and the cringeworthy varieties, and a sympathetic protagonist. When the film ends rather abruptly, I wanted to know what was going to happen to Marnie, and that means that Bujalski has hooked me.

NOTE: I was delighted to find out that Kate Dollenmayer is actually an animator whose credits include work on Richard Linklater’s Waking Life (2001).

This entry was posted in Film Festivals and tagged generationdiy, independent, mumblecore. Bookmark the permalink.