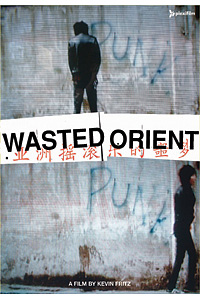 Wasted Orient (Director: Kevin Fritz, USA, 2006): I’d seen the trailer for this on distributor Plexifilm‘s site a few weeks ago and was really happy to be able to attend the film’s first Canadian screening. Joyside are a Chinese punk band based in Beijing and the film follows them on their first tour. This being China, the band starts with a 15-hour train ride to Guangzhou in the south of the country, and the long journey gives them plenty of time to drink. Drinking seems to be the constant in the film, and one gets the impression that anything more illicit than beer and gin may be simply out of their financial reach. Despite their constant state of intoxication and their aversion to bathing, the band are actually a likeable bunch of guys who are relatively proficient musicians. They name-check, either in interviews or by playing covers, many of the early punk bands and personalities from New York: The Ramones, The Dead Boys, Johnny Thunders (It gives a whole new meaning to the phrase “Chinese Rock”). And these guys are punk in that early, primitive sense: they’re nihilistic, but they’re not mean, or political. They just don’t see the point in pursuing the lives their parents or polite society would prefer for them. In that sense, they’re not much different from their idols. But, of course, this is China.

Other critics (mostly Americans, I suspect) have played up the “Communist” angle, with variations on “Rockin’ in the Unfree World” and that sort of nonsense. The truth is that modern China may be more capitalist than North America, and what Joyside is rejecting seems to be materialism and the appearance of success more than anything else.

The film is very raw, and one or two people in the small audience (maybe 20 people) found it a bit too much and left. But I was riveted. Kevin Fritz has lived in China for several years, and got to know the band very well, so he has really captured a level of intimacy that hardly seems possible for an “outsider.” The beer helps, though, as in scenes where he features each band member in a drunken one-on-one with the camera. A bit surprisingly, each comes across as touchingly earnest and even a bit maudlin.

Despite the endless beer guzzling, the pissing and vomiting, the rude gestures and the poses of despair, these are just four young guys trying to make sense of their circumstances. It doesn’t hurt that they can rock out, too.