The Pervert’s Guide to Cinema 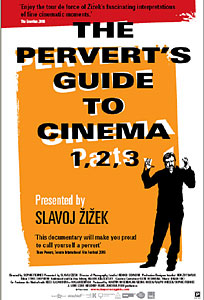 The Pervert’s Guide to Cinema (UK/Austria/Netherlands, director Sophie Fiennes): Not as salacious as it sounds, this is a three-part documentary (each episode is 50 minutes) featuring Slovenian superstar philosopher/psychoanalyst Slavoj Zizek. Zizek takes us on a journey through many classic films, exploring themes of sexuality, fantasy, morality and mortality. It was directed by Sophie Fiennes, of the multi-talented Fiennes clan (she’s sister to actors Ralph and Joseph).

I enjoyed this quite a bit, although I think it will be even more enjoyable on DVD, since there is such a stew of ideas to be digested. Freudian and Lacanian analysis can be pretty heavy going and seeing the whole series all at once became a bit disorienting by the end of two and a half hours. It didn’t help that an ill-advised coffee and possession of a bladder led me to some discomfort for the last hour or so.

My only real issue with this is that Zizek picked films that were quite obviously filled with Freudian themes. He spends quite a bit of time on the films of Hitchcock and David Lynch, not exactly masters of subtlety. I would have liked to see him try to support his theories by using a wider range of films, although that’s really just me saying I’d like to see part four and five and six.

Zizek is very funny, and part of the humour was watching him present what amounted to a lecture while inserting himself into the actual scenes from some of the films he’s discussing. So, for instance, we see him in a motorboat on his way to Bodega Bay (from Hitchcock’s The Birds) or sitting in the basement of the Bates Motel (from Psycho). Which is not to say that his theories are not provocative. Even when I found myself disagreeing with him, it definitely made me think a little more deeply about the films. Which is exactly what he’s trying to accomplish.

This entry was posted in Documentaries, Film Festivals, TIFF and tagged philosophy, zizek. Bookmark the permalink.