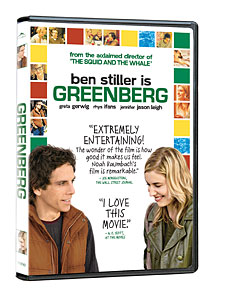 Alliance is releasing Greenberg on DVD in Canada on Tuesday July 13, 2010.

Greenberg (Director: Noah Baumbauch): As a director, Noah Baumbach isn’t afraid to show us characters who are, shall we say, less than sympathetic. In recent films like The Squid and the Whale and Margot at the Wedding, he was nevertheless able to make us sympathize with protagonists who were self-centred and needy. With Greenberg, he allows Ben Stiller to bring another of these nasty people to life, and Stiller brings his own comic gifts to bear, making Roger Greenberg someone who makes you laugh even as you secretly agree with him. The signature line of the film is found in the trailer, where his friend Ivan (Rhys Ifans) laments that youth is wasted on the young. Taking it further, Greenberg blurts out that “life is wasted on…people.” He should know.

Released from hospital after a nervous breakdown, Greenberg returns to an L.A. he abandoned years before to house-sit for his more successful brother who’s taken his family on vacation to Vietnam. He is about to turn 41 and though he is working as a carpenter, he plans to spend some time “doing nothing.” As he looks up old friends like Ivan, we find out that years before, they had been in a successful band. On the brink of signing a record deal, Greenberg balked and the band broke up. Despite his protestations to the contrary, it’s clear that he’s regretted that decision ever since. He destroyed not only his own dreams of success, but those of his bandmates. Eager not to show weakness, he’s become a bitter and narcissistic man who projects his issues onto other people, bloviating in the language of psychiatry.

The unexpected occurs when he meets and falls for his brother’s personal assistant Florence (Greta Gerwig). She’s also a bit lost, lamenting that she’s been out of college now for as long as she was in it, and not sure what she wants out of life. It’s not a fairytale romance, to say the least. Greenberg treats her appallingly, and at first she’s willing to put up with it.

In the end, it’s Ivan who teaches Greenberg how to embrace this life he never planned. He’s left his own rock star dreams behind to embrace his new role as a husband and father, not without some sadness. Thankfully, things aren’t tied up with a neat bow, and Greenberg continues to exhibit some outrageously selfish behaviour right up to the end of the film, but a very small act of sanity in the last act provides just a glimmer of hope that he will finally grow up.

Stiller is wonderful playing this bitter and aimless narcissist, but I wish the other roles had been a little more substantial, especially Florence, who too often comes across as an airheaded doormat. Nevertheless, Greenberg is a sharply-observed comedy of (bad) manners that unfortunately rings true, even outside of Los Angeles.

This entry was posted in DVD and tagged losangeles, narcissism. Bookmark the permalink.