In her generally negative appraisal of the “mumblecore” movement in the November/December 2007 issue of Film Comment, Amy Taubin reserves praise for the two features written and directed by Aaron Katz, calling him a “breakout talent” and praising both the “lyric beauty” of his cinematography (although acknowledging he used different DPs for each film) and his “expressive” sound design. I’d seen the posters for both films, and some stills and the trailer for Quiet City, and was intrigued. Though I’m still a mumblecore novice, I’ve made some assumptions of my own, and before even seeing Katz’s films, thought he had a much more developed visual sense than some of the others. With preconceptions in mind, I sat down to watch both films this weekend, thanks to the gorgeous DVD package from Benten Films, available January 29, 2008. In addition to both films, the DVD package features director and cast commentaries on both films, alternative and extended scenes, an early short film, footage from Quiet City‘s New York premiere, and more. Benten are quickly becoming the Criterion of the indie film world.

Quiet City (2007, Director: Aaron Katz): In its brief 78 minutes, Quiet City was able to accomplish something quite remarkable. By the end of the film, I was beginning to care about a couple of people whom I almost dismissed at the start. Though the script still feels a bit undercooked in places, and the sound mix often had me straining to hear what was being said, the editing and acting actually felt natural so that I journeyed with the characters from awkwardness to curiosity to empathy to genuine connection.

The story arc is modest, to say the least, and I wouldn’t consider my plot summary to be spoiling anything, but just in case, consider this a spoiler alert and skip to next paragraph if you like. Jamie (Erin Fisher) arrives in Brooklyn toward evening. At the subway stop, she asks stranger Charlie (Cris Lankenau) directions to a diner where she’s supposed to meet her friend Samantha. When Samantha fails to show, Charlie and her spend the rest of the evening and the next day together. For the first ten minutes, their twentysomething slacker (lack of) vocabulary was driving me nuts, with each “like” hitting my eardrums like a sharpened stick. But it’s remarkable how their dialogue improves as their nervousness dissipates, and before long, they’re teasing each other good-naturedly. There’s a definite attraction between them, but each is careful not to spoil it by making a wrong move. The film really catches fire as the two attend a gallery event the next evening. At a party afterward, they separate, Charlie chatting amiably with strangers about nothing much, and Jamie having a serious conversation with her friend Robin about Robin’s fear of intimacy. In her friend’s halting speech, complete with more adolescent “likes,” we see how far Jamie has moved in just a short time. When they leave the party together, it’s as if they were meant to be together, so different do they seem from anyone else they’ve encountered. They share a lovely chaste moment of affection on the subway and the film ends.

Katz’s achievement is to accomplish this in such a short space of time, and with no grand speeches or declarations of love. The plot sounds very similar to Richard Linklater’s Before Sunrise, a film I’ve not actually seen, but knowing Linklater, that film is bound to be more lofty and chatty and intellectual than this one. And perhaps less real for that reason. As a married man in my 40s, I can cringe at some of the things these characters say, but it’s only because they’re acting within their limitations. Their awkwardness and lack of direction are genuine, as is their desperate desire to hide them beneath a layer of cool.

The cinematography was generally excellent, bathing Brooklyn in a warm and golden light. There were a few occasions where a tripod would have been welcome, though, and a few of the camera set ups seemed a little slapdash, but the feeling of the images was perfect. As was the music, which was used sparingly and to good emotional effect.

I’m quite sure that Quiet City will reward repeat viewings, and I’m looking forward to listening to the cast and director commentaries to see how Katz managed to turn my feelings around so quickly. It seems a little like magic. 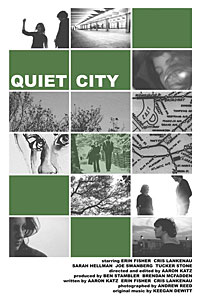 Dance Party USA (2006, Director: Aaron Katz): Although released in 2006, this film was actually shot in 2004, and so seeing it after Quiet City, I expected to notice to be a huge leap forward in Katz’s development as a director. Instead, I found myself enjoying the earlier film even more. Similar in structure and even in theme, there is a pretty big difference in tone and in at least one of the characters. I found Dance Party USA more direct and the script was much tighter.

Set among a group of high school students in Portland, the film shares the basic arc of Quiet City. Over the course of a day or two, a male protagonist reaches out to a somewhat mysterious woman and the film ends with them reaching a sweet and rather tentative connection. In the case of Dance Party USA, our protagonist is the teenaged Lothario Gus, first seen bragging about the sexual conquest of an underage girl to his vacuous friend Bill. Played by Cole Pennsinger, Gus is a guy on the brink of leaving his adolescent persona behind him. His Beavis and Butthead exchanges with Bill are leaving him unfulfilled, and he’s looking for a more real connection than the “hook-ups” he seems able to achieve with ease. One night at a Fourth of July house party, he meets Jessica, sitting alone outside. She’s a friend of his ex, and she’s aware of his reputation. But he sits down and, almost like he’s in a confession booth, he begins to tell her about something he’s done in the recent past, something that was very wrong. Somehow, he feels he can trust her, and after sitting silently through his confession, she lights two sparklers and hands him one. “Do you want to go somewhere?” she asks. Each sees something in the other that no one else has yet seen, and each wants to be that something more than anything else. Gus is actually finding that being a horny teenager is getting in the way of him finding a real connection. Jessica is more of an enigma, but played by the lovely Anna Kavan, she oozes mystery, if not depth.

Later in the film, Gus attempts to make things right for his earlier misdeed, but finds he’s awkward and unsure what to do. And his later exchanges with Bill are frankly hilarious, as he talks about wanting to pursue something creative (photography, painting) and then asks Bill for a hug. There is a lot of dialogue in this film, compared to Quiet City. The exciting thing is to see the drunken sincerity of teens at a beerbash developing into the first halting attempts at full-time adult sincerity. Pennsinger and Kavan both show their vulnerability in different ways. Gus has to escape a persona, albeit one that has served him well for some time, while Jessica has just seemed unimpressed with the quality of the men she’s been around, and is opening herself up for perhaps the first time. Maybe it’s because I’m more of a dialogue person than most, but I found these performances stronger than the ones with fewer words in Quiet City.

All in all, a great pair of films and a great introduction to an exciting young director. 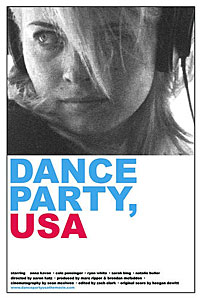 UPDATE 6/21/08 Both of these films played at the Toronto stop of the Generation DIY mini-festival which is travelling across Canada in the next few weeks. Here is the Q&A with director Aaron Katz held after the screening of Dance Party USA. The first loud voice is your humble author asking a question, the second loud voice belongs to my friend and colleague Bob Turnbull, and that’s Canada AM‘s film critic Richard Crouse hosting the session:

This entry was posted in DVD and tagged bentenfilms, generationdiy, independent, mumblecore. Bookmark the permalink.