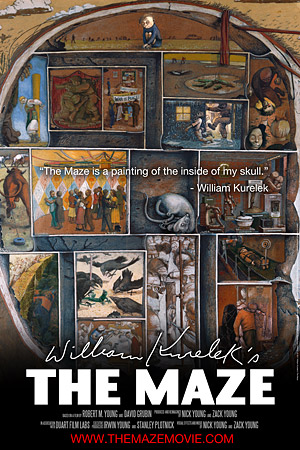 Note: Because of the intricacy of the painting depicted in the poster, I’ve linked it to a much larger version, so please click to see more. And a bit of trivia: Van Halen used a detail of this painting for the cover of their 1981 album Fair Warning.

William Kurelek’s The Maze (Directors: David Grubin, Robert M. Young, Zack Young, Nick Young): My familiarity with the work of Canadian painter William Kurelek is largely due to a childhood friendship. My friend’s parents knew the artist and despite the fact that we lived in a modest apartment building, their home contained a number of what I think were original works. It was the 1970s and I knew him as a deeply religious Catholic artist. What I didn’t know was the struggle his life had been up to that time.

In 1969, American filmmaker Robert M. Young had been approached by James Maas of Cornell University to make a film about so-called “psychotic art.” When Young saw Kurelek’s painting “The Maze” in Professor Maas’ slide collection, he knew he wanted to make a film about the man who created it. “The Maze” was painted while Kurelek was a patient at a psychiatric hospital in England in the early 1950s. It wasn’t intended for public consumption, but rather to illustrate the contents of his mind to the doctors who were treating him. Admitted in a suicidal and depressed state, he was originally diagnosed as a paranoid schizophrenic. He spent several years on and off in two different hospitals in England, and received a staggering 14 sessions of shock treatment.

How he arrived in such a mental state is the focus of the film. Young interviewed Kurelek and his family members and produced a half-hour version that was widely shown, but he had been working on a longer version that had been lost until recently. Young’s sons Nick and Zack, musicians and visual effects artists, decided to complete their father’s work on the longer film, incorporating music and animated sequences.

The interviews from 1969 remain compelling for their honesty. Kurelek himself comes across as a man of extreme shyness and humility, and his description of his darker younger days as a “spiritual crisis” give an indication of how he regained his mental health. Growing up on the prairies as the son of Ukrainian farmers, William never fit into their ideal of physical strength and mental toughness. His artistic temperament was misunderstood both at home and at school, and he was bullied physically and emotionally. Despite his journeys to Toronto and Mexico to attend art school, he never seemed to connect with kindred spirits and as a result, he felt more and more disconnected from the real world. Painting was his gift and his only form of expressing his pain, but all his parents could see was that he couldn’t earn a living.

Ultimately, Kurelek was saved (quite literally) by his conversion to Catholicism in 1957. Through his faith, he was able to turn his focus outward and to temper his perfectionist tendencies. He painted a major series on the Passion of Christ, and he began to see his own sufferings as preparation for depicting those of Jesus. He came to forgive the harsh treatment he received from his parents, and went on to paint a happier series of paintings of his childhood on the prairies. With that came a measure of success and stability, and the family that he’d always wanted. Though we don’t hear how they met, his wife Jean is interviewed in the film and their children are seen. Because the filmmakers were limited to the original interviews, we don’t get a full picture of what brought Kurelek to the point of conversion or really any details of his life from 1957 up to 1969, when the interviews were conducted.

Sadly, William Kurelek died of cancer in 1977 at the young age of 50. His reputation grew after his death and though I don’t know where current tastes rate him, it’s safe to say that he is among the greatest of Canadian artists.

The longer film really dazzles, with more focus on the individual paintings, and the use of animation really evokes the powerful emotions that must have gone into their creation. William Kurelek’s The Maze has given me a much fuller picture of a fascinating man and an artist with a unique vision. Though some of the “psychological” paintings remind me of the work of Hieronymus Bosch or Pieter Breughel, the range of Kurelek’s work as seen here set him apart as a true original.

The film has been accompanying a traveling exhibition of his work called William Kurelek: The Messenger during 2011 and 2012. It’s also being shown at the Rendezvous with Madness Film Festival, coming up from November 9-17 here in Toronto.

1 Response to William Kurelek’s The Maze