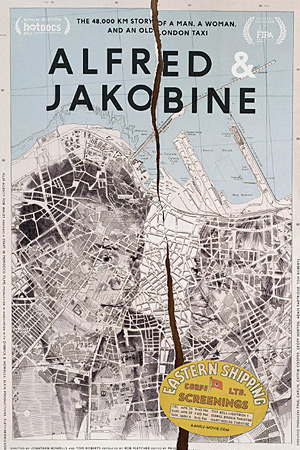 Alfred & Jakobine (Director: Jonathan Howells): After meeting and falling in love in Japan in 1955, American Alfred Hobbs and Danish artist Jakobine Schou impulsively married, with their mutually adventurous spirits taking them to Casablanca shortly thereafter. Here, the newlyweds purchased a beat-up London taxi built in 1934 and spent the next four years driving it on an epic global road trip, where the couple’s passion for each other never waned and their exploits brought them minor celebrity. When their journey was over, Alfred and Jakobine (pronounced “Yauk-o-beena”) set down roots in New York state. Not long after, Alfred unexpectedly walked out on Jakobine, leaving her shattered. The couple reconnected at a party a few years later, conceived a son, and Alfred soon exited Jakobine’s life once again. 40 years later, an 84-year-old Alfred confronting his mortality decides to fix up that same taxi, travel across America with the son he’s never really known, and surprise the woman whose heart he broke by offering her “one last ride,” as he describes it.

Director Jonathan Howells is the benefactor of this rich source material and has produced a reflective and moving film about the beauty and pain of love. The filmmaker entwines the past and present with an effective balance of first-person recollections and visual aids (taken from the couple’s archives made up of 3,000 photographs and numerous hours of their well-crafted 8mm and 16mm film footage), and the documenting of both the difficult restoration process of the taxi and the 2,400 mile trip in September 2009 that Alfred and his son Niels took in it from Taos, New Mexico to Jakobine’s home in Oneida, New York. Adding to the intrigue encompassing the modern-day trip are the distant relationship between Niels and Alfred, the arduous toll of the trek upon their delicate vehicle, and the fact the unsuspecting Jakobine (who appears to have never gotten over Alfred) has been happily remarried for decades to a likeable chap named Rusty, who actually helped coordinate the reunion.

Alfred & Jakobine‘s only real fault is that it doesn’t go deeply enough into the many fascinating layers of this story due to the all-too-brief 73-minute running time (presumably due to business considerations involving running times for theatrical screenings and television broadcast, not creative reasons). Specifically, Alfred’s mysterious reason for leaving Jakobine never feels explained to satisfaction and the scenes involving the Taos-to-Oneida journey seem scant in comparison to the four weeks it took to complete the trip. Additionally, the lack of stories involving Alfred and Jakobine’s adventures in the 50s is disappointing. The film’s press kit references one story not included in the documentary that found them “captured by armed guerrillas in (Africa’s) Atlas Mountains and…thrown into a desert prison, where they thought they would most certainly die”. It’s a testament to Alfred & Jakobine‘s core appeal, however, that a compelling narrative such as this could end up excised from the final cut and the film still has plenty of proverbial meat on the bone. Hopefully, the documentary’s future DVD/Blu-ray release allows for a more in-depth presentation. Brevity aside, Alfred & Jakobine proves to be a touching charmer.