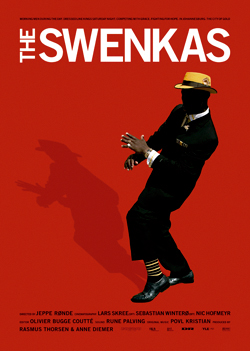 The Swenkas (Denmark, 2004, Director: Jeppe Rønde, 72 minutes): This film was really unlike any other documentary I’ve ever seen. The Swenkas are a group of about 20 Zulu men who gather each weekend to “swank”: they dress up in fancy suits and jewellery and compete before a judge to see who is the most stylish. Sort of a “Lord of the Bling” (ooh, couldn’t resist!). But it’s more than just fun for them. Swanking represents self-respect, and these men emphasize certain values such as cleanliness and sobriety. It’s as if the old adage “Clothes make the man” has come to life. Even though some may think these men are spending far too much money on their clothes, it seems to have given them the pride they need to be successful in life. Certainly no one in their families complains. Besides, sometimes they compete for large sums of money (or even, now and then, a cow.)

The reason the film stands out is the way it has been crafted. Director Rønde uses the framing device of a fictional narrator, an old Zulu vagabond who tells us a bit about the group, but also sets up the dramatic arc of the story: the leader of the Swenkas has just died, and his son is grieving and thinking about abandoning the group. This storyline gives the film the feeling of a fictional film, and at times it’s hard to believe that the whole thing isn’t carefully scripted.

The director explained afterwards that he never told the participants what to say, but that since Zulu culture is built around storytelling and the Swenkas were all used to performing, each participant had no trouble “performing” in the film. But they really were working through a difficult time in the life of their group.

The result is a beautifully shot, and even more beautifully edited film that feels more like a fable. The recurring themes are hope and the relationship between fathers and sons. The director actually told us that this film is the second in a trilogy about faith, hope and love, and I found myself really eager to see the other films. A standard documentary approach, with interviews and such, would have made an interesting film. Jeppe Rønde’s unorthodox approach has given us a transcendent one.

More information on the film here.