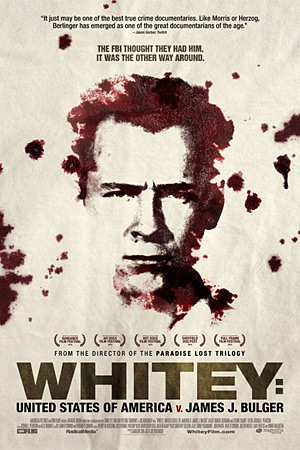 Whitey: United States of America v. James Bulger (Director: Joe Berlinger): Documentarian Joe Berlinger wasn’t kidding when he described his latest project as the most dense film he’d ever done during the pre-screening introduction for Whitey: United States of America v. James Bulger. Berlinger (best known for co-directing the Paradise Lost trilogy and Metallica: Some Kind of Monster) turns his camera this time to James “Whitey” Bulger, the Boston mob boss who terrorized the city during the 70s, 80s, and 90s with impunity from prosecution before going into hiding for 16 years until his 2011 capture in California at the age of 81. For years, Bulger was second only to Osama Bin Laden on the FBI’s Ten Most Wanted Fugitives list and he inspired Jack Nicholson’s vicious character in Martin Scorsese’s 2006 movie The Departed. Whitey is a film that demands rapt attention from its viewers, with an avalanche of information being disseminated amidst the complex twists and turns that the documentary takes.

Bulger’s crimes, which included drug trafficking, extortion, racketeering, loan-sharking, and murder, along with the 2013 trial for them, are the focal point of Whitey (curiously, his lengthy time on the lam and eventual capture are barely mentioned). Bulger was implicated in 19 murders and ultimately found guilty of being involved in 11 killings, with a total conviction count of 31 that landed him two life sentences, plus five years. Berlinger was barred from interviewing Bulger, so snippets of a phone conversation between the criminal and his lawyer are interspersed throughout the film, although they add little to the proceedings. The documentary is teeming with interviews from retired cops and FBI agents, ex-wise guys, lawyers, reporters, and the South Boston victims’ family members. The latter conversations are particularly impactful, as Bulger’s acts of brutality take on added dimension via the permanent psychological toll evident on the faces of the people whose lives he destroyed decades ago. There’s also a subplot involving one of Bulger’s alleged extortion victims, Stephen Rakes, that takes an especially bizarre turn. Berlinger’s examination of Bulger’s life and crimes inevitably leads to Whitey taking on a wider scope that finds the filmmaker also probing the corruption that permeated federal and state law enforcement agencies during the decades that Bulger operated at the peak of his criminal power. Called into question is whether Bulger, who is currently preparing an appeal of his conviction, acted as an informant for the FBI in exchange for immunity from his law-breaking, an assertion he firmly denies. The evidence suggests otherwise and one of the film’s biggest questions is just how complicit was the government in allowing Bulger to carry out his litany of crimes?

Berlinger wisely adopts an impartial stance on his notorious subject, resulting in a more comprehensive and challenging film that cements his status as an unmatched purveyor of first-rate contemporary true-crime documentary filmmaking. The Oscar-nominated and Emmy-winning director was recently in contact with Johnny Depp, who requested a copy of Whitey in preparation for his upcoming role as Bulger in next year’s Black Mass. Another drama on Bulger has also been in development by Ben Affleck and Matt Damon for the past couple of years.