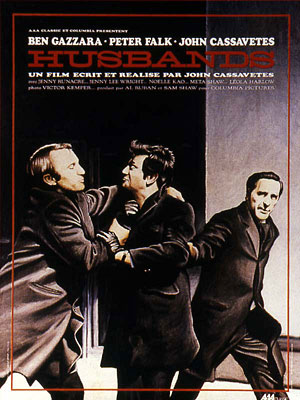 Husbands screens tonight, Monday July 18, 2011 at 6:30pm, at the TIFF Bell Lightbox as part of the series Masks and Faces: The Films of John Cassavetes. The series runs from July 14-31.

Husbands (1970, Director: John Cassavetes): I’m not certain which of the films of John Cassavetes would be the best point of entry for a newcomer, but I don’t think I’d recommend Husbands, which was my own introduction. Considered the godfather of American independent cinema, Cassavetes worked as an actor and director on other people’s films in order to finance his own unique studies of ordinary people acting out. In Husbands, it’s about the mysteries of the middle-aged male psyche, and it’s one loud and crazy ride.

His previous film, Faces (1968) had been an unexpected hit, and so not only did he find someone to help finance the film (Italian producer Bino Cicogna, whom Cassavetes had met while working in Italy on Machine Gun McCain in 1969), but later on, he convinced Columbia to release the film theatrically. Nevertheless, Husbands was a commercial failure, despite some intense performances.

It’s essentially a three-hander. Harry (Ben Gazzara), Gus (John Cassavetes) and Archie (Peter Falk) attend the funeral of the fourth member of their group, and, trying to work through their grief, go on an epic bender, which lasts several days and takes them from New York to London.

Although the tagline is “A Comedy about Life, Death and Freedom,” there are only a few places where I laughed, and uncomfortably at that. Instead, Cassavetes’ examination of male friendship, grief, and midlife crises becomes more and more harrowing as it goes on. This bender is a descent into a sort of howling existential hell.

Not being familiar with the rest of Cassavetes’ work as a director, it was initially difficult for me to tell whether these emotionally-stunted, crass and abrasive characters are meant to evoke our sympathy or not. Their “charm” certainly becomes more transparent the more time we spend with them, and Cassavetes enjoys drawing scenes out to almost absurd lengths. An early scene of a drunken singalong in a bar must run at least 20 minutes, and by the end, with our trio bullying a woman into adding more “passion” to her performance, our opinion of these guys has certainly changed for the worse. 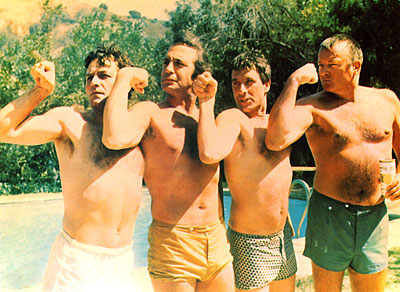 So it’s not a huge surprise when Harry comes home to change the next morning and ends up in a physical confrontation with both his wife and her mother. As the defacto leader of the trio, he’s the most aggressive. Before his ill-fated trip home, he’s told Gus and Archie, “Aside from sex, and she’s very good at it, I like you guys better.” He follows this up with a few repetitions of the phrase, “Let’s go home and get it over with.”

After his violent outburst, he grabs his passport and tells his friends that he needs to get away; otherwise, he’d just go back inside and apologize and he doesn’t want to do that. All these guys seem powerless when it comes to their wives and children and other responsibilities, but their “acting out” just seems to confirm their immaturity, despite the macho trappings.

Under the cover of concern for their friend, Archie and Gus decide to go with him, to “tuck him into the hotel and then come back home,” they assure each other. As soon as they arrive in England, they want to gamble, drink and pick up women, as if these activities are what bind men together. The only member of the trio who tries to communicate anything deeper is Archie, but poor old Peter Falk always seems to end up talking to himself. He’s the sort of actor who seems to end up doing that in almost everything he’s ever done.

There’s another long scene in London, where our three tough guys succeed in getting three attractive women back to their hotel rooms. Gus has picked up a woman who’s mentally unbalanced, and the other two appear to have hired prostitutes, but in any case, the following “seduction” scene is one of the most creepy and joyless I’ve seen in a long time. It is kind of funny to realize that the only people willing to spend time with these guys are either crazy or are being paid.

It’s a strange thing, though. Although I couldn’t wait for the film to end, I haven’t been able to stop thinking about it for days. These loud brutes, “drama kings” if I can coin a phrase, are trapped not only in their jobs and marriages, but in their conception of what being a man is all about. Their attempts to connect with each other, to grieve their friend and their passing youth, all end in shouting and violence. Their rage is inarticulate but exposes something, except they don’t have the vocabulary to express this vulnerability. Perhaps I’m reading more into the film, but I want to give Cassavetes credit for forcing the audience to spend two and a half hours in the presence of such unreconstructed brutes. Their humanity comes out not in what they say but in what they’re unable to say. This is no comedy. It’s a tragedy.