Citizen Architect: Samuel Mockbee and the Spirit of the Rural Studio 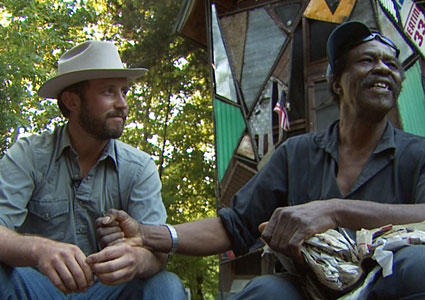 Citizen Architect: Samuel Mockbee and the Spirit of the Rural Studio (Director: Samuel Wainwright Douglas): Believing strongly that architecture is not just for rich people living in cities like New York or Chicago, Auburn professor Samuel “Sambo” Mockbee founded the Rural Studio in 1993 in Hale County, Alabama, many of whose inhabitants live in abject poverty. The studio was established as a way for students to gain some practical experience while also helping the rural communities around it. Since its founding, students and instructors have lived and worked together to build everything from houses, animal shelters, churches and even a boys’ and girls’ club.

Although Mockbee himself died in 2001, director Douglas uses a wealth of interview footage from 1999 in which Mockbee passionately argues that architects must be a part of the community they’re designing for. He’s also adamant that students of architecture actually get to build some of their academic projects, unlike at many schools where student work is strictly theoretical. Not everyone has agreed with Mockbee’s ideas; Yale professor and architect Peter Eisenman doesn’t believe, for instance, that he needs to know the people who will be living or working in the buildings he designs to know what they need. But Mockbee and his colleagues at the Rural Studio argue just the opposite. The film follows a few of his students and their projects over the past ten years.

Using mostly recycled and donated materials, the architect/builders of the Rural Studio are hoping to make a positive impact on some of the most neglected communities in America. Although for some, this will mark a phase on their professional journey, Mockbee’s passionate desire was for this experience to change his students’ lives forever. Although we don’t get a sense of where most of the participants have ended up, it’s clear that Mockbee’s ideas have influenced other architects and organizations. In Utah, Design/Build Bluff constructs similar projects on Navajo reservations, while Architecture for Humanity is doing this kind of socially-conscious architecture all over the world.

Citizen Architect is a fitting tribute to a man more of us should know about. I was happy to see some of the work that he and his students have accomplished in Alabama, but I’m even happier to see that his influence has begun to spread far beyond the rural South. As the film notes, there are far more people living in shantytowns and rural areas than there are living in the traditional centres where architects have historically plied their trade. Hopefully, more of them will understand how much they are needed outside the glittering cities of glass and steel.