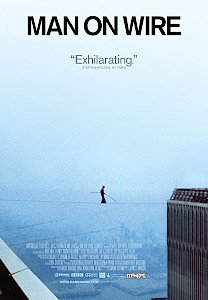 On August 7, 1974, a young French wirewalker named Philippe Petit spent 45 minutes suspended on a wire between the two towers of the World Trade Center. He made eight crossings before the police convinced him to return to safety. Though this story, according to the director, is part of New York City folklore, not many people outside the city seem to know anything about it. But what a fantastic story, and Marsh does a masterful job in telling it, mostly by letting Petit and his companions bring it to life.

Petit is a fascinating figure. An accomplished juggler, wirewalker, and pickpocket(!), he had supported himself since his teens by working as a street performer. A born storyteller, he brings the narrative alive, even almost 35 years after his great “coup.” But best of all, Marsh gathers all Petit’s accomplices as well and has each of them recount their own part in the story. Some were steadfast, like his lover Annie and his childhood friend Jean-Louis, and others fickle and cowardly, like Americans David Foreman and Alan Welner, who both abandon the quest at the crucial moment. All tell their stories candidly and all still seem enveloped in wonder that such a thing could be accomplished. 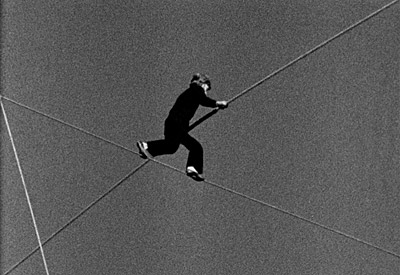 Petit and some of his companions had already planned and executed two other audacious feats of wirewalking, first at the Notre Dame Cathedral in Paris and then on the Sydney Harbour Bridge in Australia. But the Twin Towers had obsessed Petit ever since he’d read about plans to build them, and the team’s preparations are carried out like the planning of a bank heist, with one important difference. As conspirator Jean-Francois says, “It may have been illegal…but it wasn’t wicked or mean.”

Marsh artfully combines lively interviews (especially when Petit is on screen) with stills and film from each of the various events, and even some re-creations (which he later admitted were part of someone else’s aborted film on the subject). A haunting and beautiful score by Michael Nyman (composer for many of Peter Greenaway’s films) and featuring music by Erik Satie, among others, created the dreamlike atmosphere necessary to appreciate this beautiful “art crime.”

Of course, it would be impossible to see a film featuring the Twin Towers without thinking of the events of 9/11. Marsh wisely avoids making any connections, letting the footage of the buildings’ construction speak poignantly for itself. Petit’s feat seems even more wondrous when you consider that the fragile Frenchman survives while the mighty towers lie in ruins.

Here is the Q&A with director James Marsh from after the screening:

UPDATE: Mongrel Media will be releasing the DVD of the film in Canada on Tuesday December 9.

10 Responses to Man On Wire