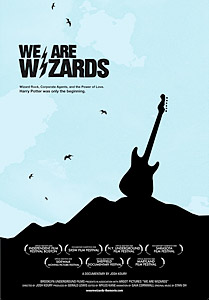 Editor’s Note: I’ve decided to begin posting my reviews of films screening at SXSW early, hopefully helping anyone attending make some decisions about what to see. We Are Wizards is screening on Saturday March 8 at 1:45pm in the Austin Convention Center. It also screens Tuesday March 11 at 11:00am and Friday March 14 at 1:45pm at the Paramount.

We Are Wizards (2008, Director: Josh Koury): I’ll have to start with somewhat of a disclaimer. I am not a wizard, by which I mean to say that I am not one of the obsessive fans of Harry Potter who inhabit this film. That being said, I was expecting something a bit more wide-ranging from the description of the film on the SXSW web site: “An entertaining and comprehensive portrait of the passionate culture of Harry Potter fans.” Instead Josh Koury follows a few of the odder fans of the books and films, with a special focus on bands inspired by the world of Harry and his friends. “Wizard rock” is an admittedly narrow subculture, and most of these bands are simply not very good. Some, like the two brothers who make up Harry and the Potters, don’t seem to take themselves too seriously, but many of the others seem a bit delusional. I found the Hungarian Horntails especially worthy of a few wizard curses of my own. Consisting of 8-year-old Darious and his younger brother Holden, the band screech “punk” songs like “Which Witch is Which” and “Kill the Basilisk”. Though I’m delighted the boys have a creative outlet, I found their parents’ adulation disturbing, and suspect that dragging their kids all over the country to play “wizard rock” seems tied in to fulfilling their own musical ambitions.

Another major subject of the film is cartoonist Brad Neely, who gained notoriety by recording his own fan commentary for the first Harry Potter film. Unfortunately, he spoke it in a really annoying voice, which he also uses throughout the film. Yet another unsympathetic subject is Carol Matriciana, a Christian woman who is opposed to the books and films because she believes they promote witchcraft. But just like every one of the fans, she’s used Harry Potter to gain some attention and to add some meaning to her life.

Perhaps the sanest of the fans featured is Heather Lawver, who also happens to be the sister of a friend of mine. Heather began a fan site while in her teens and promptly received a threatening letter from Warner Brothers, the studio behind the Harry Potter films. Undeterred, Heather started a grassroots boycott of all Harry Potter merchandise except the books (her beef was with Warner Brothers, not J.K. Rowling). Through this process, she not only learned to express herself creatively and connect to other fans, but she learned lots of legal stuff as well as the skills needed to be a political activist. Bizarrely, though, the filmmakers end Heather’s story by showing her looking at Ferraris and explaining that she’s not really into Harry Potter anymore, but wants to become a race car driver. I found that directorial choice odd.

There are a few other “talking heads” in the film, including Henry Jenkins, Co-Director of the Comparative Media Studies Program at MIT, who will be a keynote speaker at this year’s SXSW Interactive conference. Overall, though, this is not a standard talking head documentary, but more of a film for fans by fans. I thought it a little too narrowly-focused and found far too many of the subjects unsympathetic, even annoying. But what do I know, right? I’m a Muggle.

This entry was posted in Documentaries, Film Festivals, SXSW and tagged fans, harrypotter. Bookmark the permalink.

1 Response to We Are Wizards