Posted on September 8, 2007 by James McNally 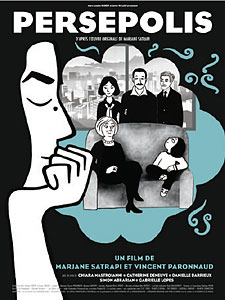 Persepolis (Directors: Marjane Satrapi and Vincent Paronnaud): Based upon the graphic novels which were blockbusters in France (and now published in one volume), Persepolis faithfully brings Marjane Satrapi’s story and images to the screen and then wonderfully surpasses them. Growing up in Iran under the repression of first the Shah’s dictatorship and then that of the Islamic Republic was not easy, even for someone like Satrapi whose family had money and connections. The film grabs our sympathy through several strongly-drawn (if you’ll forgive the pun) characters, from her saucy grandmother to her dashing political dissident uncle Anoush. But it’s ultimately the story of Marjane herself that carries us along. Her developing political awareness is connected to her personal history of displacement and the ordinary “feeling different” of adolescence.

What makes the story even more powerful is the superb animation. Two-dimensional and for the most part in black and white, it nonetheless never feels less than thrilling, and just when I was finished shaking my head at some gorgeous and poetic flourish, there was another one. I haven’t seen a film that was this consistently innovative for a long time. And yet it didn’t feel showy, as if it were the latest CGI technology trying to draw attention to itself. I had the feeling of looking over the shoulder of an intensely talented artist doodling in her notebook while telling me the most incredible story.

Best of all, at a time when many people are thinking of Iran as a potential enemy, it’s crucial to see a human story from a place where the civilization is thousands of years old. There isn’t much history in the film, but what’s there is presented simply. I was left wanting the film to continue both backwards and forwards in time, and desperately hoping along with Satrapi that the future is brighter for the long-suffering people of Iran.

This entry was posted in Film Festivals, TIFF and tagged animation, iran, TIFF. Bookmark the permalink.