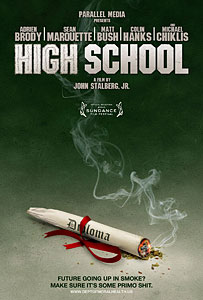 High School (Director: John Stalberg): I’m happy when a genre festival like Toronto After Dark decides to colour outside the lines a bit and bring in something that’s not specifically a horror, science-fiction, or martial arts film. Not that “stoner comedy” hasn’t become a genre unto itself, but sometimes it’s good to reach the non-horror crowd. So I was excited to see High School, (somewhat) fresh from its screenings at Sundance. Unfortunately, it’s a bit of a dud.

When Henry, the smartest kid at his high school, decides to smoke a joint for the first time with his onetime childhood pal Travis, he has no idea that fascist principal Gordon is about to introduce mandatory drug testing for all students, THE VERY NEXT DAY! When he finds out, he and stoner Travis decide that the only way to avoid failing the test is to make everyone at the whole school high. It’s an excellent coincidence that the school is having its extremely popular bake sale, also THE VERY NEXT DAY! They just have to steal some very potent flakes of concentrated THC from the most psycho pot dealer in the world, bake hundreds of brownies, and then switch them with the regular brownies. No problem for the smartest kid in the school and his new friend. Along the way, there’ll also be some male bonding and Henry will win the girl of his dreams and still get to be valedictorian.

Maybe I’m just old. I know these films aren’t supposed to make any sense. And yet, this one rubbed me the wrong way almost from the beginning. Our buddies bore an uncanny resemblance to Michael Cera and Jonah Hill in Superbad, a film I liked quite a bit, despite the similarly unrealistic plot and emotional bonding between two high school seniors going in different directions. The difference is in the writing. Every attempt at relationship-building in the film felt completely tacked on to the madcap action. I can almost see the writer cutting-and-pasting this stuff into the script in a late draft. And apart from Matt Bush as Henry, everyone else’s performance is wildly over-the-top, which is fine in the case of Michael Chiklis playing the evil principal, or Adrien Brody chewing the scenery as Psycho Ed the dealer. But I found the character of Travis Breaux (get it, bro?) and the actor playing him (Sean Marquette) to be insufferably smug. He represents the self-satisfaction of this film, which thinks it’s being edgy but is just charging off in all directions.

I found the treatment of female characters to be particularly poor, bordering on offensive. One of those is an Asian-American whose only function in the film is to provide the filmmakers a way to make repeated bad puns on her last name (Phuc, get it, bro?). The love object has precisely one line, and a number of other women in the film exist only to be ogled, fondled or harassed. This might have been okay in the 80s, but it feels dated and unfunny now.

Worst of all, for a stoner comedy, it actually makes getting high look like the worst thing in the world. Slowing down the audio to make people’s voices sound weird to the stoned isn’t that funny the first time. It’s certainly not funny the third or fourth time, either. Several characters hallucinate and become paranoid after smoking pot, and one decides to ride his skateboard off a ramp into the cafeteria on the next floor down, injuring himself in the process. You might as well have had someone thinking they could fly and jumping off the roof.

There are some very good stoner comedies out there (Harold and Kumar, for a start) so there isn’t any need to see bad ones, no matter how high you are. If this film was trying to be Superbad with weed, it just turned out to be super bad.

This entry was posted in After Dark, Film Festivals and tagged #afterdark10, stoners. Bookmark the permalink.