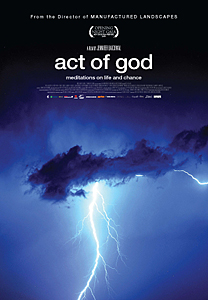 Baichwal traveled around the globe to hear seven different stories that respond to these questions. In Las Vegas a former CIA assassin, Dannion Brinkley discusses his near death experience and how it transformed him into a kinder, gentler person. He was clinically dead for 23 minutes after being struck by lightning and survived. For him the event had profound meaning, a second chance at life and an opportunity to atone for his sins. Now he heads the largest association of hospice volunteers in the US.

In Cuba we witness the rituals and offerings that some people make to Shango, the god of thunder and lightning. They believe that if you keep Shango happy he won’t send lightning bolts to their community.

One of the most vivid descriptions of this unique experience comes from James O’ Reilly. When he was a teenager in northern Ontario he and several friends were struck by lightning and thrown to the ground. One of the boys didn’t survive. O’ Reilly revisits the exact location of the event and even though it took place 28 years ago, he describes what happened with such terror and conviction that you feel as though you were actually there.

I had high expectations going into this film. I thoroughly enjoyed Baichwal’s previous films Manufactured Landscapes and The True Meaning of Pictures. Surprisingly, Act of God wasn’t as “electrifying” as I thought it might be for an opening night film at Hot Docs. I guess you can’t hit a home run every time.

2 Responses to Act Of God