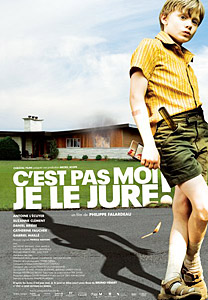 C’est pas moi, je le jure! (It’s Not Me, I Swear!) (Director: Philippe Falardeau): Originally screened at TIFF in 2008, this bittersweet film from Québec returned as part of the Canada’s Top Ten screening series at Cinematheque Ontario this weekend, and I’m so glad I caught up with it.

Based on the memoirs of Bruno Hébert, C’est pas moi, je le jure! is the story of the troubled Doré family in 1968 Québec, told from the very unique perspective of ten-year-old Léon, a liar, vandal and thief who will do just about anything to keep his battling parents from splitting up. When we first meet Léon, he’s hanging from a tree, and we’re unsure if this is the result of a misadventure or a suicide attempt. Much of the rest of the film details the trouble he gets into, and those two possibilities remain in our minds. Clearly his “acting out” is a cry for attention, and he admits as much when he explains that a strategically-lit fire always stops his parents from fighting, and even brings the family together as they struggle to put it out. Despite this example, it’s difficult to convey just how skilfully the film blends humour and heartache, but the mixture is a large part of the film’s appeal.

When he fails to stop his mother from running off to Greece, Léon’s behaviour becomes even more desperate. He bonds with Léa, a girl from a similarly broken family, and they hatch a plan to steal money and buy plane tickets to Greece. Falardeau keeps this material from becoming too grim or too melodramatic by not dwelling for too long on the characters’ feelings. Léon doesn’t mope, he acts, and even though the episodic nature of the film resulted in a few false endings, I was happy to keep following along to see what Léon was going to do next.

He can go from smashing up a neighbour’s house while they’re on vacation to sitting down and playing Schubert on their harpsichord. He behaves terribly, but then feels remorse. He’s a boy trying to deal with an adult world, and without the coping mechanisms of his older brother Jérôme, he just lashes out without thinking. The performance of Antoine L’Écuyer is simply astonishing. He’s like a young Jean-Paul Belmondo, a gangster with a twinkle in his eye. The film itself reminded me of The 400 Blows, another chronicle of a troubled childhood that still sparkled with innocence. Supporting L’Écuyer’s incredible performance, Falardeau’s direction combines the nostalgic setting, some swooping cinematography, and the warm music of Patrick Watson to evoke a time and mood where the transition between childhood and something else felt scary and exhilarating all at once.