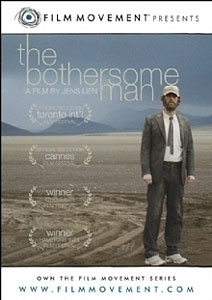 The Bothersome Man (Den Brysomme mannen) (Director: Jens Lien, Norway/Iceland, 2006): “Forty-year-old Andreas arrives in a strange city with no memory of how he got there. He is presented with a job, an apartment — even a wife. But before long, Andreas notices that something is wrong. He makes an attempt to escape the city, but he discovers there is no way out.” I remember reading this synopsis in the programme guide at TIFF last year and wanting to see this film. Now, thanks to the folks at Film Movement, I can. Well, technically, I can’t, since Film Movement doesn’t offer subscriptions to Canadians, but they were nice enough to send me some films to review, and I’d encourage any of our American readers to check them out if you haven’t already. A new indie or foreign film every month for less than the price of two cinema tickets. Now, on to the film:

I’ve always been a fan of Nordic humour; dry and deadpan, as in the films of Aki Kaurismäki. Lien’s film is that, with a touch of Kafka thrown in. You see, Andreas arrives in the strange city after throwing himself in front of a subway train, and this extremely pleasant afterlife turns out to be hell, after all. Food is tasteless, there are no children, and everyone seems obsessed with decorating and furniture. Even sex is boring, though it seems easily available. In fact, everyone seems to go out of their way to make sure Andreas is happy. Only, he’s not. For all the polite kindness he finds, it seems that Andreas can’t find love. There is no real connection between anyone in this nether world. No conflict, granted, but no passion at all. All talk is small talk.

The only glimmer of hope comes when he discovers a crack in the wall of a new acquaintance’s apartment. Through the crack they hear music, and can smell wonderful scents. Is this a way back to the world of the living?

The clever thing about the film is that seen in a certain way, it could very well be a commentary on the real world, especially the Western world of banal social pleasantries and mindless consumerism, and in particular, the well-meaning socialist welfare states of Scandinavia. It’s a safe world (one unforgettable scene has Andreas trying to repeat his subway suicide, to no effect), but one without vitality.

Lien has carefully wrapped his sharp social criticism in a witty and at times absurd film that is equal parts horror and science fiction. Forget 28 Weeks Later. These are the scarier zombies.

Note: Film Movement featured this film as their Year 5 Film 3.