Lights in the Dusk 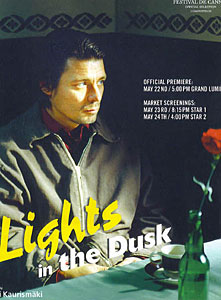 Lights in the Dusk (Finland/Germany/France, director Aki Kaurismäki): This is the third film in Kaurismäki’s “Helsinki Trilogy” (the others are Drifting Clouds (1996) and The Man Without a Past (2002)) While I haven’t seen the first, this film shares many thematic and formal elements with the second film, and I enjoyed it just as much.

Koistinen is a lonely security guard who is ignored by his co-workers; that is, when he’s not being teased by them. His life is soon turned upside down by a femme fatale, with heartbreaking results. Despite the grim-sounding plot, the film is full of the director’s trademark deadpan humour. And I’m in awe of how he can make the film just radiate love despite the mannered acting and awkward staging. Perhaps it has to do with the warmth of the lighting and the colour palette, as well as the use of nostalgic music and art direction. Whatever it is, from the first frame, you know the director loves this sad sack and wants us to love him too.

The films of the Helsinki Trilogy all deal with people on the margins, and it’s clear that Kaurismäki’s sympathies lie with the common people and not with those whose success or power has dehumanized them. He is a true humanist, and his “heroes” all bear their sufferings stoically; in fact, they quite literally personify a “never-say-die” attitude, and that makes them admirable. Their hangdog expressions may make us pity them, but it’s their core of inner strength that makes us love them.

This entry was posted in Film Festivals, TIFF and tagged finland. Bookmark the permalink.