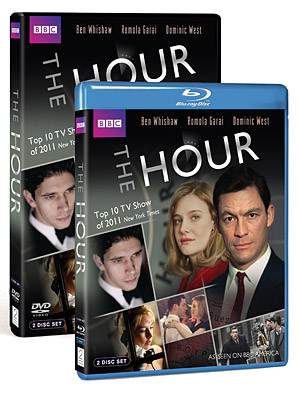 Editor’s Note: The Hour will be released on DVD and Blu-ray in the US and Canada on February 7 by BBC America. You can help Toronto Screen Shots by buying from Amazon.ca or Amazon.com.

For my Canadian readers, I must begin by saying that obviously this is not the CBC chat show with George Strombolopoulos. Instead, The Hour is a BBC series about the making of a television newsmagazine program in the 1950s. This promises the art direction of Mad Men with the backstage maneuvering and larger political intrigues of something like Good Night and Good Luck. Starring a cast of British actors who will be largely unknown to North American audiences (Romola Garai, Dominic West, Ben Whishaw), the six hour-long episodes of this first season (or “series” as the English more accurately describe it) set up the creation of a new program to deliver the news to the British public in the early days of television.

It’s 1956 and TV news is still being delivered like the newsreels shown in the cinema. Young BBC reporter Freddie Lyon (Ben Whishaw) and his best friend/crush Bel Lyons (Romola Garai), already bored of the way they’re presenting the news, apply for positions on a new program, “The Hour.” But there is also a dark conspiracy brewing, and by the end of the first episode, two people are dead, one of whom was a friend of Freddie’s. While he investigates the murders, Bel is coping with her new position as producer as well as flirting with the handsome anchorman Hector Madden (Dominic West). Whishaw has just the right amount of cynicism to play the underdog, and based on the first hour, I’m hopeful that the conspiracy stuff will win out over soap opera melodrama and romantic entanglements.

The series has been a success on British television and has already been renewed for another six-episode series.

This entry was posted in DVD, Television and tagged bbc, Television, uk. Bookmark the permalink.