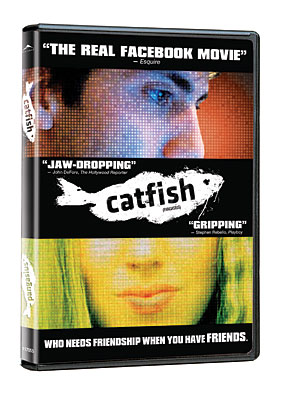 Alliance released Catfish on DVD in Canada on January 4, 2011. Help support Toronto Screen Shots by buying it on Amazon.ca.

Catfish (Directors: Ariel Schulman and Henry Joost): I finally got see last year’s Sundance sensation and have to say I’m in agreement with the critic from Esquire who called this “the real Facebook movie.” While a film like The Social Network focuses on the creators of the world’s largest social media platform, this film shows how ordinary people are using it, often with just as much ingenuity.

Directors Joost and Schulman are filmmakers from New York City. In fact, they worked on my favourite 2010 film NY Export: Opus Jazz (review). Ariel’s younger brother Yaniv (Nev) is a photographer who took stills for that film, and when one of his photos was published, he received a box a few weeks later. Inside was a painting based on the photo by “Abby,” an 8-year-old artist from Michigan. So began a correspondence which took place through the mail, by telephone, and especially through Facebook, as Nev friended first Abby’s mom Angela and then her 19-year-old half-sister Megan. As the months go by, Nev and Megan develop a serious online crush that is augmented by late-night phone calls and regular texts.

Joost and Schulman begin to document this web of relationships almost from the very beginning. When the trio make a trip to Colorado to make a dance film, Nev invites Angela, Abby and Megan to come out and join them. Although they can’t make it, they maintain constant contact, with Megan even posting songs online that she claims to have written and performed. The first cracks appear in the facade when Nev finds out that the songs have actually been lifted from the YouTube and MySpace pages of other performers. They decide to make an unannounced stop on their way home.

I won’t say any more, except to say that if you’ve been online as long as I have, you won’t be surprised by the outcome. What’s interesting is that these are young, internet-savvy New Yorkers, for crying out loud, and you’d expect them to be a bit more wary. Nevertheless, they have weaved these elements into a pretty gripping film. So much so that more than a few people have accused them of staging or faking some or all of it. I don’t think that’s the case, but I can see how the suspicion might arise.

Catfish is a great story, and a pretty good film, but it’s not that much of a revelation to anyone who has been part of Internet culture before Facebook arrived. People always choose what aspects of themselves they reveal online. When you have a chance to “meet” so many new people, it’s tempting to edit your own story until it can become almost unrecognizable. There’s a reason why there is an online virtual world called “Second Life.” Sometimes you just need to get away from your first one.

The only special feature on the DVD is a 25-minute conversation with the filmmakers in which they answer some common audience questions. Obviously, you don’t want to watch this until after you’ve watched the main feature.

This entry was posted in Documentaries, DVD and tagged facebook, internet, socialmedia. Bookmark the permalink.