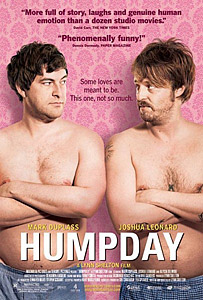 Humpday (Director: Lynn Shelton): Two reviews in a row about films by women directors about the delicate relationships between men. But Humpday and The Hurt Locker (review) couldn’t be more different. Where the latter ratcheted up the tension with action and explosions, Lynn Shelton’s film builds it with queasy laughter and an outrageous game of chicken.

Ben (Mark Duplass) is a thirty-something transportation planner, happily married to Anna (Alycia Delmore) and living in a nice house in Seattle. And then his old college buddy Andrew (Joshua Leonard) arrives in the middle of the night, looking for a place to crash after returning from an artists’ colony in Mexico. It’s clear that the two have taken different paths since college, but Ben doesn’t like the feeling that he’s become a cliche, so he accompanies his friend to a wild party at the home of a bisexual artist Andrew’s just met. After many substances have been consumed, the talk turns to Humpfest, Seattle’s amateur porn contest.

In a moment of drunken one-up-manship, Ben suggests to Andrew that they should make a tape of the two of them having sex. It will be the greatest art project ever, he says, it will be “beyond gay.” Challenging his “artist” buddy to contribute to an art project is a sly form of dare, and Andrew can’t say no. Even in the sober light of day, the two of them can’t seem to back down. The best scenes are of Andrew trying to let Ben back out. “I know this scene isn’t really for you,” he says, which only gets Ben to dig in his heels.

Shelton has perfectly captured the competitiveness of men, even modern sensitive men. The subtle chemistry between Ben and Andrew is a joy to watch, even at its most uncomfortable. Each man’s fears are driving this ridiculous battle of wills. Ben’s afraid he’s lost whatever edge he might have had in college, and Andrew feels that his artist persona is really just a phony mask covering up a much more regular guy. The comedy is sharp, but for me it was the comedy of recognition.

It’s also bittersweet, as these two guys realize that their friendship, genuine as it is, has changed as their lives have changed. I hope this won’t spoil the ending, but the emotional release the two friends eventually achieve is more fulfilling than any “money shot” could ever be.