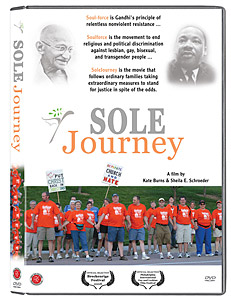 SoleJourney (Directors: Kate Burns and Sheila E. Schroeder): I’ve admired the work of Rev. Dr. Mel White and the Soulforce organization for years now and this documentary, partially funded by Soulforce, promised to shed some light on the organization’s continuing fight against the anti-gay agenda of Dr. James Dobson’s Focus on the Family organization. Unfortunately, the film comes up short for a number of reasons.

First and foremost, it’s not terribly clear what the main focus of the film is. The title itself confused me until I realized it was referring to the 1000 Watt March, a Soulforce “action” in which GLBT families marched from Denver to Colorado Springs (home to Focus on the Family), a distance of 65 miles, in five-mile “relays.” But the march doesn’t even really enter into the film until about the halfway mark. For the first 30 minutes or so, we get something closer to a history of the beginnings of Soulforce, and its connection to the non-violent resistance philosophy of Martin Luther King Jr. and Mahatma Gandhi. Although Rev. Dr. White does appear in the film, I didn’t feel there was enough of him for this to be considered a real history of his organization. Instead there were lots of news clips emphasizing the media’s view that Focus on the Family is an influential and important organization. I found this unnecessary, and it seemed to unbalance the film and expose its lack of structure.

When we do get to the march itself, we simply get random shots of small groups of people walking along the highway, interspersed with some footage of their regular family lives at home. Although these families are definitely worthy of having their stories told, I wanted more of the at-home stuff and less of the anticlimactic “march” stuff. I even enjoyed the talking head interviews more than the coverage of the march, although none of it seemed to ever coalesce into a larger whole. I found the soundtrack cloyingly sweet, too, although it definitely contributed to the overall “inspirational” feeling I think the filmmakers were aiming for.

Soulforce’s mission is to combat “religion-based oppression” of LGBT people but there was very little about the religious basis of that oppression. In that respect, I found the film compared quite unfavourably with Daniel Karslake’s For the Bible Tells Me So (review), which even used some of the same footage of the demonstrations at Focus on the Family’s headquarters. That film also managed to feature some LGBT families in a sensitive way, and I’d hoped that SoleJourney might have built upon the earlier film. Instead, I don’t think it will have much appeal to anyone who doesn’t already believe in what Soulforce is doing.