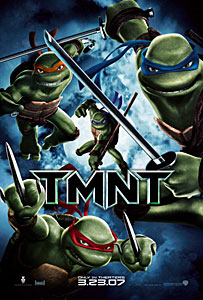 I found myself sitting in the a theatre with my 7-year-old son Daniel, waiting for TMNT to start. Like most 7-year-olds, he has a fascination with ninja turtles. I don’t. All I could think about were the really bad one-star reviews I had read about the film.

By the time the credits rolled, I was relieved. The movie wasn’t that bad. It’s basically a 3D version of the TV show but with really good production values. The animation by Imagi Entertainment is impressive and gave me something to admire while the turtles ate pizza and bickered.

The animation and the rendering don’t live up to Pixar standards, but so what. A 7-year-old kid isn’t going to notice or care about how realistic the fabrics are rendered or if the inverse-kinematics in the character animation is incredibly realistic.

It made me wonder who Pixar is really making their incredible films for. Why not crank out a bunch of mediocre movies like everyone else? Why raise the 3D bar with every film? The kids won’t care or really notice so long as the story is solid. Will they?

I asked which movie he thought was better, Superman Returns or TMNT. I was sure he would pick Superman Returns but he quickly replied with, “TMNT. It had way more action.” My shoulders slumped forward and my chin collapsed into my chest. When I recovered, Daniel asked me if we could get the TMNT video game for PS2.

This entry was posted in Theatrical Release and tagged animation, children, pixar. Bookmark the permalink.