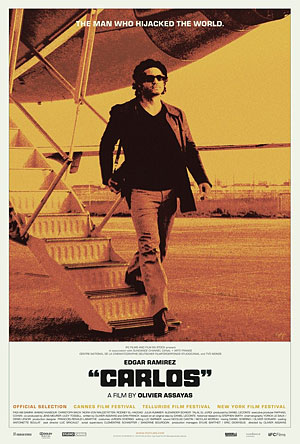 Carlos (Director: Olivier Assayas): The prospect of sitting down to watch a 330-minute film is always a little bit daunting, but luckily I found myself at the TIFF Bell Lightbox’s largest auditorium, surrounded by only 6 other brave souls. In this luxe environment, and fortified by two intermissions, I let Assayas’ television miniseries envelop me like the cinematic epic it’s being sold as on this side of the pond.

I grew up in the 1970s, and so the story of Carlos “the Jackal” was already familiar to me. Lest the younger generation think that terrorism was invented on 9/11, let me remind them that the 1970s was a crazy time indeed. Europe was wracked by political terrorism from radical groups like the Red Brigades in Italy, the Baader-Meinhof gang in Germany, and the Irish Republican Army in Ireland and the UK. The Palestinian issue was also particularly hot, with groups like the PLO (Palestinian Liberation Organization) and the PFLP (Popular Front for the Liberation of Palestine) carrying out attacks in Europe as well as in the Middle East. Even Japan had its own homegrown radicals, the Japanese Red Army. In these Cold War times, the Soviet Union was happy to clandestinely fund the mayhem, just as the Western governments funded dissidents in the Eastern Bloc nations. I’m not even going to mention the proxy wars carried out in Africa and Latin America.

With so many little fires burning, it seemed only a matter of time before someone arrived to try to connect them together. Carlos (real name Ilich Ramírez Sánchez) was the son of Venezuelan Marxists and had been educated in Moscow before launching himself as a terrorist. Pledging his fealty first to Wadie Haddad and the PFLP, Carlos begins the film with his older girlfriend and her son in a settled life in London, where his cover is giving Spanish lessons. During dinner at an upscale restaurant, he argues with her that they need to stop talking about revolution and get involved. Even in this early conversation, he’s talking about glory and his girlfriend rightfully sees that his monstrous ego is at odds with his revolutionary principles. The setting is also telling, for Carlos has a love for the good life that he never bothers to reconcile with his avowed hatred for the capitalist system.

I don’t want to spend the entire review providing plot summary, but I must mention that there is a lot of it to summarize. There is so much ground to cover that for the first two hours, I was disappointed slightly by the lack of characterization. But by hour three, we’re coming to realize that Carlos is an insufferable idiot, puffed up with vanity and blind to his own ignorance of geopolitical forces. His appetites for booze and sex lead him to treat the women around him with contempt, even as they serve as safe havens when he’s on the run. As the film progresses, Carlos starts to enjoy his growing celebrity in the Western press. He gives speeches to hostages about who he is during terrorist operations, even signing an autograph in one case. The funny thing about his spectacular rise is that he’s actually not a very effective soldier. He botches most of his operations and when he ends up releasing hostages taken during his biggest operation (the storming of the OPEC conference in Vienna in December 1975), Haddad cuts him loose from the PFLP.

Vowing to start up his own group, he recruits a few loyalists with whom he’s worked in the past. Chief among them is Johannes Weinrich from the German Revolutionary Brigades, and his former girlfriend Magdalena Kopp, who eventually becomes Carlos’ wife. They set up house first in East Berlin and then in Budapest, where they try to enlist government support for their group. Carlos talks a lot about plans for operations, but never seems to get much done. A KGB-backed plan to assassinate Egyptian President Anwar el Sadat gestates for years before the Muslim Brotherhood beats Carlos to the punch in 1981. All the while, Carlos is living like a mafia don, surrounding himself with luxury and supplementing his relationship with the beautiful Magdalena with visits to prostitutes and affairs with other women. After another botched operation in 1982 involving a car bombing in Paris, Magdalena is arrested and imprisoned, and Carlos flees to Syria where he lies low for several years.

In 1990, Syria, newly-allied with the US, asks Carlos to leave the country. Failing to find a welcome in Libya, he ends up in Sudan. By this time, Magdalena has given birth to their daughter, but has decided to leave Carlos and return to live with his mother in Venezuela. Carlos takes up with another woman and lives his usual extravagant lifestyle, courtesy of the Sudanese government. All the while, his former allies in the Syrian government are seeking to sell information on his whereabouts to the highest bidder. Eventually, the French government decides to bring him back to France and put him on trial, and the end of the film shows his very undignified capture.

Some reviewers have remarked that the final third “sags” a bit, but in the arc of Carlos’ life, that is only natural. His spectacular rise in the 1970s was followed by a long, slow decline, partially due to his own weaknesses but mostly due to the shifting political forces that in the end made him irrelevant. His inflated sense of self-importance grows to look ever more pathetic as his base of operations keeps shifting to smaller and more insignificant locations. It also makes his bourgeois lifestyle stand out in even sharper relief when he mentions his solidarity with the oppressed. In the end, the first celebrity terrorist was nothing more than a construct of his own fantasies and those of the media he loved to court.

In his portrayal of Carlos, I must salute Venezuelan actor Edgar Ramirez, who was able to project an out-of-control ego in Spanish, English, French, German and Arabic. He also had to gain weight, lose it, and gain it again as Carlos’ lifestyle and age take their toll. Although he is not playing a very sympathetic character (this is not Che, after all), Ramirez holds nothing back, giving every one of Carlos’ ridiculous utterances his full conviction.

Although this was originally conceived as a three-part television miniseries, there are several advantages to seeing it all at once. Chiefly, I really did come to see how much of a fraud this man was and my annoyance level after five hours was impressively high. As well, seeing one terrorist attack after another, whether botched or “successful,” drove home the complete and utter senselessness of trying to effect political change using these methods. These pathetic little people, whether idealists or sociopaths, are so far removed from the corridors of power that they’re used and discarded with little regard by the political players of the world, and to whose ranks they’ll never be admitted.

In that sense, Assayas’ film, so broad in scope and full of details, may end up sticking with me much longer than I initially thought.

P.S. In case you are thinking that the film will be a 5.5 hour slog through senseless violence and raging ego, I will point out a few delights. First, Nora von Waldstätten, who plays Magdalena Kopp, is a porcelain-skinned beauty with a pronounced allergy to brassieres. She was always a pleasure to look at, and I hope to see her in more films. Second, Assayas populates the soundtrack with some inspired, though unusual, songs from the punk and postpunk eras. If you’re a fan of The Feelies, Wire or A Certain Ratio, the soundtrack will keep you smiling.

This entry was posted in Theatrical Release and tagged biopic, terrorism. Bookmark the permalink.