This Saturday, Innis Town Hall hosts the 4th edition of the Toronto Youth Shorts Festival, a showcase for young filmmakers to present their work in front of an appreciative audience. This edition features 31 short films broken into three separate screenings. At 4:00pm, the “Young at Heart” programme promises “high energy entertainment that is loaded with bouncy fun.” Following at 5:30pm is “Our Zany Adventures” which features “an exploration of the physical world and some of the more and eccentric characters within it.” Finally at 7:30pm comes “A Different Perspective” featuring “films offering a different perspective of the world.”

I’m proud to be involved as a member of the Online Film Critics’ Jury, along with my friends and colleagues Titania Plant (Classic Flick Chick), Courtney Small (Big Thoughts from a Small Mind), Genevieve Walker (Scene Creek) and Addison Wylie (Film Army). We’ll be presenting one of the awards at the festival, and so I was able to get an advance look at a few of the films. Here are some preliminary thoughts on four of the films (all documentary shorts) that I’ve seen thus far: 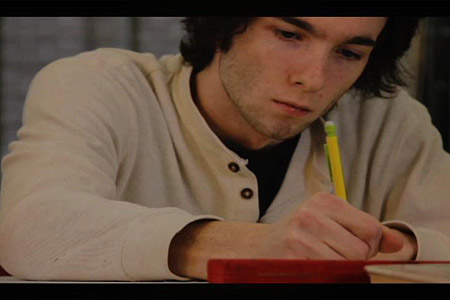 This short portrait of young artist Leo Krykowski features a potentially interesting subject, the artist’s recollection of his mother’s recent death and how it is being reflected in his work. Unfortunately, it suffers from technical rough edges, relying on natural light and handheld camerawork when it could have benefited from controlling the shooting environment more. Leo’s an articulate young man and it’s a real shame we see so little of his artwork. Instead, we spend a bit too long at a session of hypnosis therapy that is meant to help him tap into his grief.

A short documentary about the annual pie-baking contest in Warkworth, Ontario. Something this narrowly focused needs to have an interesting character or two, and when the upstanding grandmothers of Warkworth seem just a bit too vanilla, the director herself steps in, deciding to enter the contest despite a complete lack of baking experience. This helps the film a bit, especially the part where her own pie’s travails lead to some inadvertent swearing, but overall, this just isn’t all that compelling.

Despite the awkward title, this short issue doc does a pretty great job exploring different aspects of its subject, the potential for contamination of the water table of the city of Guelph by a quarry. The talking head interviews are well-chosen and well-shot, and the editing actually leads the viewer to some insights on the issue. To top it off, the film adds visual interest with some excellent helicopter shots of the quarry and surrounding area. Keeping the story tightly-focused on a local issue makes sense in a short film, and this one gets it just right, despite the fact that nobody from the provincial government agreed to be interviewed.

In just 8 minutes, this film introduces us to Kyle Freeman, who flaunted the ban on gay men donating blood. Taking on Canadian Blood Services in court, he spent eight years amassing huge legal bills only to lose his case. In his opinion, the benefits to patients outweigh any risks the medical establishment might see. Others see it as simple misguided discrimination against the gay community. Here’s a case where the short format just doesn’t give us enough time to get to know Freeman and his motivations as well as the full range of opinion on this still-divisive issue. This is definitely interesting stuff, but it would really benefit from a fuller treatment, including some voices from the people who support upholding the ban.

Hope to see you at Innis Town Hall on Saturday! Grab some tickets right now and help support the burgeoning careers of the next generation of Canadian filmmakers.

This entry was posted in Film Festivals, Shorts. Bookmark the permalink.