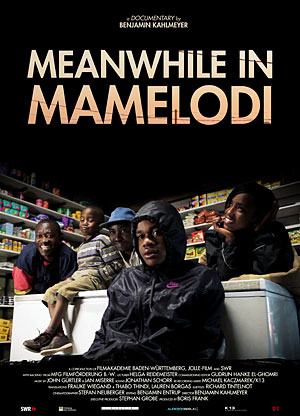 Meanwhile in Mamelodi (Director: Benjamin Kahlmeyer): In 2010, South Africa hosted the first soccer World Cup ever held on the African continent, and excitement and expectations were high. The plucky South African team (known affectionately as “Bafana Bafana” from the Zulu word for boys), despite being among the lower-ranked teams, was expected to perform well as the host nation. In this, his graduation film, young German filmmaker Benjamin Kahlmeyer captures a bit of the optimistic spirit of South Africa during a time when the eyes of the whole world were upon them.

Fortunately, he sets up his observation post in Mamelodi, a shantytown outside of Pretoria, far from the coverage of the World Cup “human-interest” stories. Here, miles away from the stadiums, life continues to be a daily struggle. We meet tuck-shop owner Steven, determined to support his family and help his children achieve a better future. Despite the fact that his wife is suffering from a mysterious mental illness, he manages to run his business and take care of his young son and teenage daughter. 17-year-old Lerato (or “Mosquito” as she calls herself) is a talented soccer player in her own right, and brimming with self-confidence. We see their experience of the World Cup, where most of the people in the township crowd around a small television in the local bar to watch each match. One of the greatest scenes in the film is watching (through Kahlmeyer’s curiously fixed camera) as patrons pour out of the bar into the street after South Africa’s first goal. It’s captured a pure moment of joy for the community, which, alas will not last.

As the tournament continues, and Bafana Bafana’s performances leave them on the sidelines, the air goes out of the balloon a little bit for Mamelodi and perhaps for the entire country. The very real challenges its citizens face are clear in every frame of this film, although it’s far from a piece of misery porn. Instead, the film captures many moments of everyday beauty in the lives of Steven’s family, from the humour and affection shared while bathing his young son, to Mosquito’s talks about boys with her best friend.This affectionate portrait captures both Steven’s melancholy and Mosquito’s endless confidence. While Steven remembers growing up with apartheid, he’s at least hopeful that his children will have a better future. Mosquito? Well, as she explains at the end of the film, she’s not really interested in hearing those apartheid stories anymore. Her generation are looking ahead, not backwards.

The often-static camera is used to great effect and subjects are often framed as if they are in still photographs. In fact, the last scene in the film uses this quite strikingly. After the cameraman has been trying to get the family to hold a pose for a long time, Steven’s young son finally loses patience and wanders away. Into the future, no doubt.