From the Sky Down 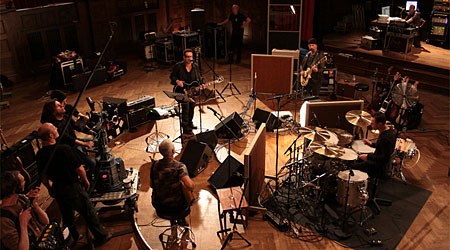 From the Sky Down (Director: Davis Guggenheim): When asked to choose the best two albums in U2’s catalogue, most fans and music critics will pick 1987’s The Joshua Tree and 1991’s Achtung Baby. That the band’s strongest work is on albums that sound so radically different from one another is, even two decades later, fairly astounding, and points emphatically to the group’s renowned disdain for creative passivity. As frontman Bono has famously said, Achtung Baby was “the sound of four men cutting down The Joshua Tree“, as U2 struggled to cope with superstardom and needed to “go away and dream it all up again.” That hard-fought musical and personal journey for the band forms the foundation of From the Sky Down, directed by Davis Guggenheim (best known for An Inconvenient Truth and Waiting for Superman). Guggenheim, who had previously directed U2 guitarist The Edge in his underseen 2008 film It Might Get Loud, was approached by the band to put together some sort of visual document to tie in with the upcoming 20th anniversary reissue of Achtung Baby.

From the Sky Down takes a surprisingly brief glimpse at the band’s overall history and I was also somewhat taken aback by the complete absence of any mention of what they might have up their sleeve for the future. No, the focus here is almost entirely on the late 80s-early 90s era of the group, a refreshing approach from a rock documentary format that traditionally only offers a quickly moving biographical summary, with little allowance for a truly in-depth examination of particular periods or albums. Perhaps the band was inspired by The Promise: The Making of Darkness on the Edge of Town, another high profile doc that deconstructed the making of a classic album from their friend and peer, Bruce Springsteen. From the Sky Down features extensive one-on-one interviews with each member of the band (they’re rounded out by drummer Larry Mullen Jr. and bassist Adam Clayton) that provide a comprehensive revisiting of a period that began just after the band’s explosion in popularity with the release of The Joshua Tree, through to the beginning of their landmark Zoo TV Tour in 1992. Not surprisingly, the interviews with the sharp-witted Bono are the most revelatory and entertaining. Special attention is paid to 1988’s Rattle and Hum, the much-derided and misunderstood documentary (with a companion album) that chronicled U2’s burgeoning interest in American roots music. Personally, I’m a huge fan of the film, but the band admits their message was misinterpreted and only reinforced many people’s opinion of the Irish quartet as self-important and insufferable personalities. Guggenheim makes good use of some previously unseen Rattle and Hum outtakes, including one that shows an irate Bono ripping on some incompetent stage workers.

Achtung Baby‘s difficult recording sessions form the heart of the film, with additional perspective provided by the album’s producers (Daniel Lanois and Brian Eno), engineer (Flood), and longtime photographer (Anton Corbijn). Guggenheim reconvenes the group at Berlin’s Hansa Studios, where recording began, but where little results were produced due to creative friction and roadblocks. Bono and The Edge wanted to take U2’s sound in a more electronic, experimental direction, with which Mullen Jr. and Clayton couldn’t come to terms. The occasional animation sequences that Guggenheim employs (accompanied by band member voiceovers taken from their interviews) are used to best effect here, with one sequence showing metaphorical walls being erected between the four bandmates. The visual takes on even more symbolic meaning, considering they were in the city during the fall of the Berlin Wall. The band digs out and reflects on old demos, and talks about their songwriting process, which frequently features Bono using gibberish (dubbed “Bongolese”) in place of unwritten lyrics. Two songs get the most attention: “Mysterious Ways” and “One.” The former, originally titled “Sick Puppy,” helped the band turn a corner from their creative difficulties and eventually led to the creation of “One,” which sprang from an idea used in the original bridge in “Mysterious Ways.” The two tracks were the only ones from the album that were completed in Berlin, with the rest finished back home in Dublin.

Guggenheim’s decision to bookend the film with scenes from the group’s much-hyped appearance at this past summer’s Glastonbury Festival is only moderately effective, but he captures some great footage of the band rehearsing various Achtung Baby songs in preparation for the big gig (one of the filming locations is Winnipeg’s Burton Cummings Theatre, during a tour stop in the city this past spring). The standouts include a rough run-through of “Who’s Gonna Ride Your Wild Horses,” which really jumped out of the speakers of the Ryerson Theatre’s sound system, and a rare solo vocal performance from The Edge of the album’s haunting closing song, “Love Is Blindness.” U2 has always been a band that has been quite protective of their creative process, and judging by the looseness and candour demonstrated by the band as we see them revisit old songs and experiment with arrangements (we see Bono yelling out upcoming chord changes to the rest of the group), it’s clear that Guggenheim was able to cultivate an intimate level of trust with his subjects.

Shot over the course of six months earlier this year and completed just a week before its world premiere last month at TIFF, Guggenheim’s documentary digs deep down into the inner workings of a band at a pivotal and tumultuous phase in their career. My only complaint about From the Sky Down would be that the director doesn’t quite dig deep enough when it comes to looking at the whole of Achtung Baby, an album that Bono says in the film “is the reason we’re still here now.” An inordinate amount of attention is paid to the creation of “Mysterious Ways” and “One” (which are important songs, to be sure), while other notable tracks such as “The Fly,” “Even Better Than the Real Thing,” “Who’s Gonna Ride Your Wild Horses,” and “Until the End of the World” are included only as performances or over the soundtrack, with little or no detail or insight into their origins. One of the album’s best songs, “Ultraviolet (Light My Way),” isn’t mentioned at all, nor can I recall even hearing a snippet of it in the film. Despite this relatively minor negative, From the Sky Down is loaded with positives that make it essential viewing for any U2 fan.

This entry was posted in Documentaries, Film Festivals, TIFF and tagged music, U2. Bookmark the permalink.