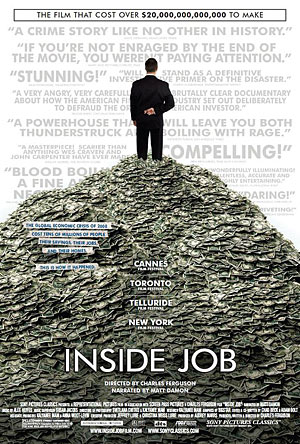 Inside Job (Director: Charles Ferguson): Based on director Ferguson’s last film, the masterful No End in Sight (review), I expected Inside Job to be meticulously-researched and yet compelling enough to appeal to a mainstream audience. Having the film narrated by Matt Damon will surely help attract a wider audience, no small feat for a documentary examination of a difficult and potentially very dry subject.

We begin the film in Iceland. Strangely enough, my wife and I were actually vacationing in Iceland in September 2008 when its banks began to fail. This tiny country’s financial industry had become severely overextended, lending amounts many times the value of the country’s GDP, and its recklessness led to political turmoil and an economic recession that is still being felt. Little Iceland was the “canary in the coal mine,” warning the rest of the world what was about to happen, but it was entirely too late to stop the disaster.

The filmmakers lay most of the blame at the feet of the big investment banks (Morgan Stanley, Goldman Sachs, Bear Stearns, Citigroup, etc.) who created new investment products based on extremely risky mortgage debts. By rewarding executives based strictly on sales, they encouraged a “food chain” of lenders to extend credit to people who had a very high risk of defaulting. When this did indeed happen, these banks simply could not recover, since they’d lent out many times more than the value of their own holdings. Cynically, they had counted on a government bailout, which is exactly what happened. The same businesses who decried government “interference” when faced with the prospect of more regulation now turned to the government to bail them out of their own risky behaviour.

According to Ferguson and producer Audrey Marrs, they set out to make a non-partisan look at the crisis, and just like in No End in Sight, both Democrats and Republicans come out looking bad, but in their general disdain for any sort of financial regulation, the Republicans look worse. Tracing the roots of the problem to a flurry of deregulation under Republican President Reagan in the 1980s, Ferguson also indicts the Clinton administration for playing along throughout the 1990s. Perhaps the most infuriating and baffling person in the film is the man who promised change but who has failed to deliver it. Barack Obama seemed to have put his finger on the problems in the largely self-regulated (ie. well-nigh unregulated) financial services industry during his presidential campaign. But when it came time to choose the members of his government, he filled key positions with the same old cronies who had benefited from the status quo. It’s no surprise, then, that no significant reform has occurred, even after almost two years of Obama’s presidency.

A very interesting part of the film is Ferguson’s exploration of massive conflicts of interest within the academic community of economists. There is very little significant debate around the current policies of opposing regulation in the United States. This is reinforced by the fact that most business school professors make the bulk of their incomes doing consulting work for the big investment banks and financial firms. That they never seem to disclose these relationships is disquieting, to say the least. Meanwhile they are educating tomorrow’s business leaders to maintain the status quo, even as that system’s risks have been exposed again and again.

Although the film is a pretty standard talking-heads and archive footage documentary, it’s livened up in places by some inspired music choices. It also helps that a few of the interviewees are left twisting on the hook by Ferguson’s questions. Their discomfort elicited laughs from the audience, but it’s also disturbing that men with such important positions in the country’s (and by extension, the world’s) economic institutions come across as either liars or morons.

If I can level one criticism at Inside Job, it’s that the film is very light on showing the effects of the economic meltdown on average people. There is one segment, perhaps a minute long, when a woman whose family was victim to the subprime mortgage crisis shares her sad story, but she was the only one. Perhaps Fergusion didn’t want to pull the heartstrings too much, but it really helped take the issue out of the abstract world of numbers and bring it down to harsh reality. When the losses are being calculated in the hundreds of billions, a dose of everyday reality is needed for everyone.

Here is the Q&A with director Charles Ferguson, producer Audrey Marrs and financial journalist Gillian Tett (who appears in the film) from after the screening. They are introduced by TIFF documentary programmer Thom Powers.

1 Response to Inside Job