Posted on September 7, 2010 by James McNally 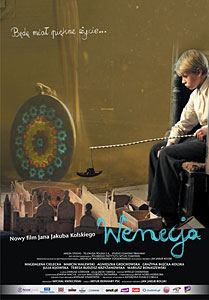 Wenecja (Venice) (Director: Jan Jakub Kolski): Based on either a novel or a series of short stories by Włodzimierz Odojewski (I can’t seem to find out which), Wenecja‘s reach exceeds its grasp in the end, but it’s a feast for the senses nonetheless. It begins with a tantalizing synopsis: 11-year-old Marek is the child of aristocratic parents. Although everyone else in his family has seen Venice, he has yet to have the experience, and it’s become a bit of an obsession for him. Unfortunately, the outbreak of war in 1939 dashes his plans, for Venice and a whole lot more. He is sent to stay with his aunt at the family’s old manor house in the country, where a motley collection of female cousins and other aunts has assembled, along with his grandmother. His father and older brother have gone off to fight, while his spoiled mother claims to have been called up by the White Cross, a relief organization, but has instead run off with one of her lovers. When the manor house’s basement is flooded one night during a storm, Marek and his aunts decide to recreate the canals of Venice. It’s a powerful piece of imagination and a defence mechanism against the encroaching violence of the German invasion.

But as the film continues to add potentially interesting characters, it becomes evident that it’s not quite the coming-of-age story that we expected. Although there are bits of romance with Marek and his female cousins and the young maid, he brushes them off, retreating instead to the basement where he repeats “I don’t want to be here” like an encantation. The film then follows some of the other characters, including Marek’s mother and her sisters, each of whom has a potentially interesting backstory. There is also the local Jewish family, whom the film is at great pains to point out are treated very well by the aristocrats. Marek’s brother Victor turns up after a while, but his character isn’t really explored, even when Marek follows him one day on one of his mysterious excursions.

Wenecja seems to want us to mourn the passing away of the Polish aristocratic class even as their suffering seems more like inconvenience. Anyone familiar with European history will know that most Poles were suffering far more than this family, and that thought clouds any goodwill we may develop toward this group of refined and attractive people. It doesn’t help that the cinematography is uniformly gorgeous, making even the one attempt at grit (a German fighter plane strafing a column of Polish troops) an exercise in high style instead. 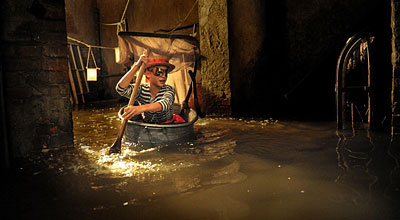 When the family’s hideout is finally discovered by the Germans, it’s their good fortune that the soldiers are part of a propaganda unit, who film their mock-Venetian carnival and then go away. While there’s a sense of foreboding afterward, the film ends abruptly by skipping ahead to the end of the war, and showing us not Marek but another character. It’s a conclusion that’s both confusing and unsatisfying.

I got the sense that Kolski’s film could have gone on in several directions. There were more than enough interesting characters and plotlines introduced. Instead, the film leaves us hanging, wishing for more. Though many of the images in Wenecja are unforgettable, in the end it is only a beautiful fantasy, covering over the ugly reality of what was going on elsewhere in Poland. Thus it fails to have the sort of emotional impact that it should, which is a real pity.

This entry was posted in Film Festivals and tagged #mwff10, poland, ww2. Bookmark the permalink.