Posted on September 4, 2010 by James McNally

I realized that all I’d posted about my trip to Montréal so far was my list of films to see and then a few reviews. I wanted to post a little bit about my trip and about the festival experience itself, in case any of you are thinking of making the journey in the future.

I returned this past Wednesday after spending five days at the 34th edition of the Festival des films du monde. Started just one year after Toronto’s Festival of Festivals (now known as TIFF), Montréal’s oldest film festival has remained the personal project of Serge Losique, who has determined to keep its focus on (mostly) European art cinema. Although it has gradually been dwarfed by Toronto’s juggernaut, it still offers a huge range of programming (430 films from 80 countries!) and it has plenty to offer cinephiles who don’t mind doing their homework. Not to mention that it takes place in a beautiful city and that tickets cost a fraction of what TIFF is charging these days.

One of the things I like about MWFF’s programming is that it features a pretty wide range of what I’d call more commercial offerings from a few European markets. For instance, Quebécers are big fans of French cinema, so instead of only getting a few “important” films like at TIFF, this festival offers everything from comedies to thrillers, not only from France, but from places like Belgium and Spain as well. I also think that M. Losique and his programming team must be fans of the national cinema of places like Russia and the Balkan countries, for those seem to have healthy representation in the programme, at least over the two years that I’ve attended.

I purchased the 10-coupon booklet for $65 (all taxes included) this year, and that also gave me a $5 discount on the programme guide, which normally sells for $20. Compare this to TIFF’s prices ($160 plust HST and “fees” for 10 tickets, $32 plus HST and “fees” for the programme guide) and you’ll see what I mean about MWFF being a bargain. Apart from the cost, the festival experience is far less stressful as well. Unfortunately, that’s mostly due to the lack of crowds. It would be nice to see a few more sold-out screenings.

There are a few quirks. First of all, and this may be a problem with most festivals, but the web site needs some work. It’s navigable, but it needs to be updated in a more timely way. Even as a newsletter subscriber, I wasn’t notified when the programme was announced, nor was there a press release posted on the web site. For the record, the festival announced the full lineup on August 10th, but I had to dig around on the site to finally figure out when it had been updated.

Another caveat is that, although most films are shown with English subtitles, there are a few that are not. Last year, for instance, it was only when I was standing in line to get my ticket that I realized that the Spanish film I was anticipating was screening with French subtitles only. The key is looking for the letters “s.t.a.” (sous-titres anglais) in the printed schedule or on individual film pages of the web site. It can be deceiving since every film description in the programme guide and on the web site is translated into English, leading one to believe that an English speaker can actually see and understand every film in the festival. It doesn’t happen often, but if you want to avoid disappointment, check the schedule carefully.

Normally, each film screens several times but there some that may only screen once, another reason to check the schedule beforehand when planning your dates. Last year, I attended from Monday through Friday, and I found that many of the films I wanted to see were not programmed on the weekdays. Including a weekend this year turned out to be a good idea.

This year, I saw 9 films. I had a ticket for a tenth (The Myth of the American Sleepover, which I subsequently heard great things about), but opted for an early night instead. I haven’t written about all of them yet, but hope to get at least one more review posted before the madness of TIFF begins.

I also got to enjoy a little of the city itself. I stayed in an apartment in the Mile End neighbourhood owned by the mother of my friend Nicolas Gulino, a documentary filmmaker. Although I didn’t get to spend as much time with Nicolas as I would have liked, the apartment was in a fantastic location, 5 minutes’ walk from both Fairmount Bagel, Montréal’s oldest bagel bakery, and Dieu du Ciel, home of some of the most sublime microbrews I have ever tasted.

For the past two years, MWFF has proved to be a tasty appetizer for TIFF. If you have the time, I’d recommend checking it out. I took the train, and VIA’s service is comfortable, convenient to downtown, and relatively inexpensive. They even have free wi-fi on the trains.

Here are a couple of photos. They’re not great, since my camera was on full zoom and so they’re a bit blurry. They are, in order, Pete Smalls is Dead (review) director Alexandre Rockwell, star Seymour Cassel, Limbo (review) director Maria Sødahl, stars Line Verndal and Bryan Brown. 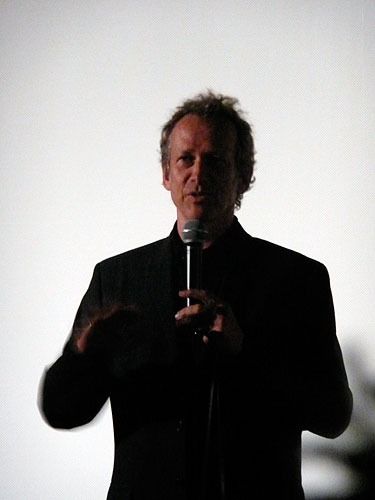 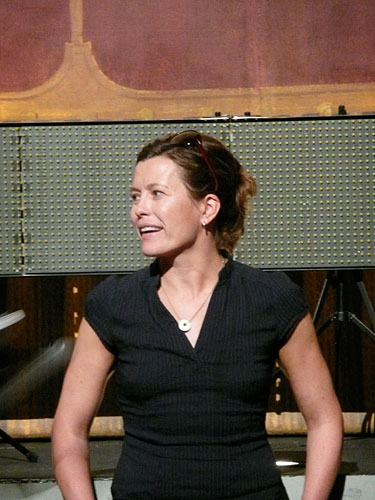 This entry was posted in Film Festivals, Travel and tagged #mwff10, Montréal. Bookmark the permalink.