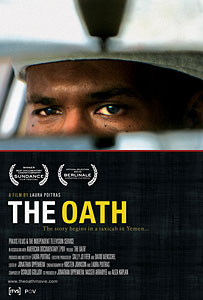 The Oath (Director: Laura Poitras): Poitras’ follow-up to the Oscar-nominated My Country, My Country, The Oath is one of the most penetrating portraits of Islamic fundamentalism I’ve ever seen. It’s a story of two young men, one idealistic and the other naive, who are swept up into jihadism only to find themselves part of some of the most world-shaking events in recent history.

We first meet Abu Jindal behind the wheel of his taxi, haggling with and ferrying passengers through the chaotic streets of the Yemeni capital city of Sana’a. He’s in his mid-30s with a wife and young son, trying hard to make ends meet. We soon learn that he once had much grander ambitions. From 1996 to 2000, Abu served as Osama Bin Laden’s bodyguard in Afghanistan. His brother-in-law Salim Hamdan was Bin Laden’s driver. Then we learn that while trying to get his family out of Afghanistan after the US invasion in late 2001, Salim was picked up by Pakistani troops looking for Arab prisoners to sell to the Americans. He has been imprisoned at Guantanamo ever since.

From here, the film shifts back and forth, from Abu’s new life in Yemen to the upcoming military trial of Salim. Abu, though free, struggles with guilt. Why is Salim in prison and not him? We come to learn that only Abu took an oath of loyalty to Bin Laden. He had been the idealistic young man who recruited Salim and many others to jihad. Lacking job opportunities and father figures, they gravitated naturally to the certainty and security that surrounded Bin Laden’s group. Abu eagerly swears his loyalty, while Salim, not quite as certain, is content to take the lowly job of driver. Abu is soon in Bin Laden’s inner circle, not only serving as his bodyguard, but also as his “emir of hospitality,” welcoming new recruits to the camp and determining their suitability as soldiers. He swears that Salim never knew anything about operations or weapons, and his guilt is only compounded by his family relationship. Bin Laden had ordered the two young friends to return to Yemen and marry two sisters, and now Salim’s wife and children (the youngest of whom he’s never met) are constant reminders to Abu of his responsibility.

Abu Jindal is an enormously charismatic man, with an easy smile and a touching devotion to his young son Habib. When he claims to feel pain over Salim’s continued imprisonment, we believe him. The mystery that hangs over the film, why is Abu free and Salim imprisoned, is eventually revealed and I don’t want to spoil it here. What is so interesting about the character of Abu is that he is obviously still a jihadist, but that he has changed his mind on many things. He claims to have always been against the killing of civilians, preferring to meet his enemies “soldier to soldier” on the battlefield, but after serving time in prison in Yemen, he has renounced violence as well. He is an ideological soldier now, arming young Muslim men to become the doctors, lawyers, preachers and engineers that he claims are also needed in Islam’s struggle against the values of the West.

The sections of the film set in Guantanamo are equally important, though less compelling since we never see Salim. His lawyers and the US military prosecutors lay out their cases, and these deliberations form some of the most important legal proceedings in recent history, but all we know of Salim is through his letters home. His absence haunts the film, as we come to believe that he truly is someone simply caught up in something much bigger than himself.

Both men’s reflections on their past actions and beliefs are candid and moving, even as we sense that Abu will never stop believing that Islam is locked in an eternal struggle with every other belief system in the world. It’s sad that we can feel so close to someone and yet so divided at the same time.

Cinematically, the film is stunning, mostly due to the footage from Yemen, a land where the buildings are beautiful and the women are covered. Poitras quite often focuses her camera on the children. Seeing Salim’s beautiful young daughters growing up without him makes us keenly aware that separating a man from his family is a terrible thing. At the same time, watching young Habib trying to learn his prayers from Abu, we worry that blind obedience to a father can be an equally terrible thing. And yes, my Western prejudices also made me sad that these laughing and chatty little girls will soon be covered from head to toe and silenced. It’s hard to reconcile that that is what Abu and Salim were fighting for in Afghanistan, what they want to spread around the world. And that is also what makes The Oath so compelling. I can’t wait to see it again.

Here is the Q&A with director Laura Poitras from after the screening, conducted by Hot Docs Director of Programming Sean Farnel: