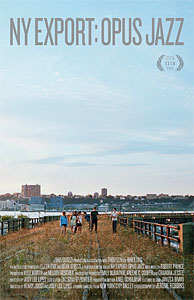 NY Export: Opus Jazz (Directors: Jody Lee Lipes and Henry Joost): It has been a very long time since I have been as knocked out by a filmgoing experience the way NY Export: Opus Jazz knocked me out. Based on the choreography of Jerome Robbins and created by dancers from the New York City Ballet, it’s a dance film, sure. But even if you don’t think you’re interested in dance, you owe it to yourself to immerse yourself in this mesmerizing film.

The original ballet piece premiered in 1958, a year after the success of West Side Story on Broadway. Robbins considered Opus Jazz a companion piece but more of an abstraction of West Side Story. This “ballet in sneakers” has no dialogue and no discernible story. And yet, it powerfully conveys the mood of what it must feel like to be young and beautiful and living in New York City. Originally performed overseas in Spoleto and on Broadway in 1958, it wasn’t revived again until the New York City Ballet performed it in 2005. Two of the dancers who performed in that revival, Ellen Bar and Sean Suozzi, saw the potential for a film and began raising funds.

The result is a 46-minute film of the ballet performance itself, followed by a 15-minute documentary on the film’s making. Using real New York locations and shooting in widescreen 35mm, directors Lipes and Joost always provide visually interesting spaces for their dancers to move in, or even just to pose in. The dancers, dressed in street clothes, are all gorgeous and make up a group diverse enough to look like real New Yorkers. Once they start to move, the film comes to life, and the camera constantly prowls around and above them, dazzling us with remarkable views. The combination of the camera’s movement with that of the dancers creates a sexy and hypnotic effect. Though some of the choreography might have appeared dated, somehow the dancers and camerawork make it seem more retro cool, and instead the film bursts with life and youth. Something about the incredible pulsating sense of movement, for lack of a better word, moved me (pardon the pun) and left me practically breathless with awe. Not to mention grasping for just the right words to describe my feelings.

The good news is that PBS has picked this up as part of its Great Performances series, and it will be televised beginning on March 24 on your local PBS affiliate. The bad news is that because of that deal, the film will have no theatrical run in the US, and no film I’ve seen so far this year deserves to be seen on a large screen more.