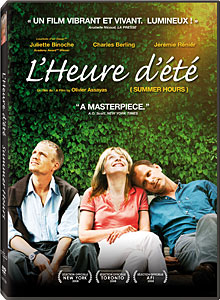 L’heure d’été (Summer Hours) (Director: Olivier Assayas): On the one hand, Summer Hours has been getting some of the strongest reviews of the year, and yet in some quarters it is being derided as “the furniture movie.” Let me explain.

Hélène (Edith Scob) is the matriarch of a large extended family. Her daughter Adrienne and sons Frédéric and Jérémie visit her in her country home perhaps twice a year. Her uncle was a famous painter and so the house is filled with valuable objets d’art; paintings and furniture are both everyday objects and valuable art pieces. She pulls aside eldest son Frédéric (Charles Berling) during a family visit to speak to him about what should be done with all these things after her death. He doesn’t want to listen. Of course we’ll keep the house as it is, he tells her, for them and their children. But when she dies unexpectedly, it turns out that his siblings have different feelings.

Adrienne (Juliette Binoche) works as a designer in New York City and is constantly in motion. She treasures her memories but has no attachment to the things now that her mother has gone. Jérémie (Jérémie Renier) works as a plant manager in China and has settled there with his wife and children. He needs money to buy a bigger house. So the push and pull begins over what to do with everything. Considering some of the criticism I’d heard, I expected this to be petty, but it definitely is not. This family loves each other deeply, but their lives have taken them to different places.

Assayas’ film pointedly asks us what our “stuff” actually means to us. Hélène laments that when she goes, so much goes with her. Each object in her house has a history that only she can tell. The children’s memories are different, less attached, and the grandchildren hardly know the place at all. The film is a moving meditation on growing old and leaving the world. When each person dies, she takes many things out of the world forever. Though the objects are left behind, their life has gone with the person who held their story. In the end, objects, even beautiful ones, are only objects when their stories have been forgotten.

Far from being a movie about furniture, Summer Hours is about human beings and their absolutely unique contributions to the world. I could not watch this film without thinking every second of another film. Mia Hansen-Løve, Assayas’ wife, directed the similarly powerful Le père de mes enfants (The Father of My Children) (review). Not only do they share a similar theme, but both feature the lovely and magnetic Alice de Lencquesaing, who has a very bright future ahead of her. As well, both directors have an incredible way of working with their actors, coaxing performances of real depth. Though I don’t think Hansen-Løve’s film has yet received the acclaim it deserves, the two films would make a wonderful double-bill.

This entry was posted in DVD and tagged aging, death, family, france. Bookmark the permalink.