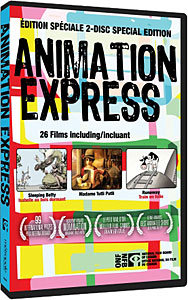 Animation Express (Directors: Various): The National Film Board of Canada has long been renowned for the quality of the animated films it has produced over the years, from the pioneering work of Norman McLaren back in the 1940s right up to the most recent innovations in computer animation being used to tell stories today. Animation Express is a collection of some of the best work from the past ten years or so. The 2-disc DVD collection contains 26 films, while the Blu-Ray features 39, including two Oscar-winners (Torill Kove’s The Danish Poet and Chris Landreth’s Ryan). Another Oscar nominee (which should have won, ahem) is Madame Tutli-Putli, which appears on both collections.

Though I did find one or two duds, the level of quality is remarkably high and with so many to choose from, the joy of discovering new talent will extend for weeks. And with the longest film clocking in at just around 18 minutes, this is a perfect disc to put on when you don’t have a lot of time. If you have a Blu-Ray player, I’d obviously recommend the Blu-Ray disc. Not only do you get more films, but each is pristinely presented in the highest definition.

Highlights for me were Sleeping Betty, Land of the Heads, and Cordell Barker’s new award-winner Runaway. But so far, I’ve only worked my way through about a third of the stuff on this generously stuffed disc.