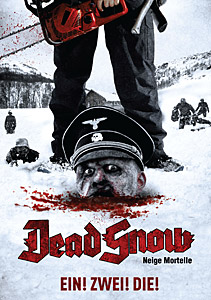 Dead Snow (Død Snø) (Director: Tommy Wirkola): With a great tagline (“Ein! Zwei! DIE!”) and a winning concept (Nazi zombies!!), Dead Snow should have been a lot of fun. I’d missed it when it screened recently at the Toronto After Dark Film Festival and so was happy to catch up with it on DVD. The setup is pure cheesy horror cliché: a group of six medical students head up to the mountains for a weekend of drinking, skiiing, and maybe a little romance. But what they soon find out is that the site of their little weekend getaway was once a notorious Nazi outpost during the days of Germany’s occupation of Norway. The exposition is helpfully provided by a creepy old man who happens to drop by to ask for coffee. He tells them that many people were tortured and killed until the villagers rose up to drive the Nazis into the mountains, where they froze to death. He also tells them the Nazis had been hoarding gold toward the end of the war, and that it’s never been found.

His function in the story over, he leaves and is soon dispatched in his tent by an unknown assailant. Our rowdy group of friends soon discovers a chest in their cabin full of, you guessed it, Nazi gold. Meanwhile, the one guy who knows the area takes off on his snowmobile to find his girlfriend, who had been skiiing over the mountains to join them but who hasn’t yet turned up. He soon comes upon the old man dead in his tent and begins to get a bad feeling. Back at the cabin, one of the girls hasn’t returned from the outhouse, and before you know it, the cabin is under siege by undead German soldiers.

At this point, the film has been predictable but fun. Our first sight of the zombies in Nazi uniforms is interesting, but the film itself quickly degenerates into repetitive scenes of running away or hacking at the zombies with whatever implements are available. Our snowmobiling friend is forever catching air on his machine, even when being chased by the undead, and the repetition turns what could have been a unique take on the zombie film into a bore. The characters are almost interchangeable in their blandness and by the end, I wasn’t really keeping track of who’d been killed.

Although this could have been a bit more fun with a crowd, I’m sure it wouldn’t have made it a better film.

This entry was posted in DVD and tagged horror, nazis, norway, zombies. Bookmark the permalink.