Posted on September 7, 2008 by James McNally

Food Inc. (2008, Director: Robert Kenner): In this comprehensive and yet compelling film, director Robert Kenner, along with authors Eric Schlosser (Fast Nood Nation) and Michael Pollan (The Omnivore’s Dilemma) indict the American (and by extension, global) food industry. Just the fact that we call the producers of our daily bread an industry at all shows what sort of major changes have taken place in the worlds of farming and raising livestock in the past century. The explosion of fast food in the 1950s brought factory methods to the production of food and the ensuing consolidation among corporations has resulted in an increasingly monopolistic marketplace. To save costs, the size of farms and feedlots and slaughterhouses has escalated and safety standards and working conditions have plummeted.

This wide-ranging film touches on almost every conceivable issue that has affected our food supply, from new bacterial organisms that threaten our health, to deteriorating goverment regulatory bodies, the widespread use of illegal immigrant workers, and the explosion in diabetes rates among the young. And yet we’re still sold an image of American’s agrarian past, and we believe it. None of the big food producers were willing to talk to Kenner, and so he spoke to others: to the woman whose 2-year-old died from an E. Coli infection, the chicken farmer who refused the demands of one of the big corporations and lost her contract, the man trying to fight for slaughterhouse workers’ rights, and the articulate organic farmer who’s simply trying to fight the good fight for honest and healthy food. And more than just talking heads, there are some eye-popping images from slaughterhouses and some incredible overhead shots of the vast feedlots where the majority of our food comes from. 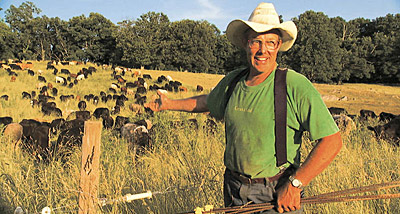 Most disturbing, or at least problematic, is the recent phenomenon of small organic food companies being bought up by the large corporations. Is this a legitimate attempt to “green” their businesses, or is it just “greenwashing”? Is the fact that Stonybrook Farm, the largest organic food company, is now selling its products at Wal-Mart a good or a bad thing? The film touches on the subject but leaves the conclusions to us. That’s a bit symptomatic of a film which brings up so many serious issues, but doesn’t have time to tackle them all. I’d recommend the two books above as a starting place, and the film’s accompanying web site also promises to be a useful resource, not just for educating ourselves, but for taking some action.

It’s a little difficult for me to be objective about this subject, because I’ve read the books and have seen a number of documentaries over the past few years on this subject, but I am hopeful that this film has the potential for mass appeal where others have not. After our screening, there was a long ovation and some insightful questions. It remains to be seen whether this film will catch the imagination of the mainstream (non-film-festivalgoer) population. I desperately hope so.

Official site where you can find next steps

Here is the Q&A with director Robert Kenner and author Eric Schlosser from after the screening: