Posted on September 4, 2008 by James McNally 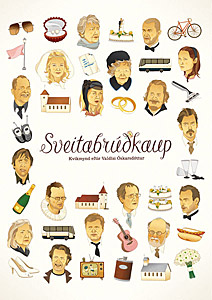 Country Wedding (Sveitabrúðkaup) (2008, Director: Valdís Óskarsdóttir): For a country of just 300,000 souls, Iceland has a remarkably creative and productive population. It’s practically crawling with artists, musicians and filmmakers and normally we get a good selection of Icelandic films at TIFF each year. Strangely, this year there are only two, and they are both about weddings in the countryside. I chose to see this one based on the trailer, which made it look more like a comedy than Baltasar Kormákur’s White Night Wedding (Brúðguminn), which is in all likelihood an equally worthy film. Director Valdís Óskarsdóttir is a well-known editor who has worked on the films of Gus Van Sant, Michel Gondry, Lars von Trier and others; it makes sense that for her directorial debut she would return home to work with a talented group of actors who were comfortable working in an unorthodox way.

The barebones story concerns a couple traveling in two rented buses with their families, friends and assorted hangers-on to their wedding ceremony in a country church. The film is more interesting for the methods used in its making than the actual story itself. Óskarsdóttir gave each of her actors a sort of character outline and asked them all to come up with their own backstories and at least one “secret” that they could choose to reveal or not reveal during filming. They rehearsed, but only events that would have happened before the actual events portrayed onscreen. The actual shoot was just seven days long and was completely unscripted and largely improvised. The results are genuinely funny and uncomfortable in equal measure, with the plans and relationships going off the rails at every opportunity. The best part of the cast Q&A after the screening was learning that several of the onscreen obstacles and revelations were actually real.

Here is the Q&A with director Valdís Óskarsdóttir and the cast from after the screening:

This entry was posted in Film Festivals, TIFF and tagged #tiff08, iceland, wedding. Bookmark the permalink.