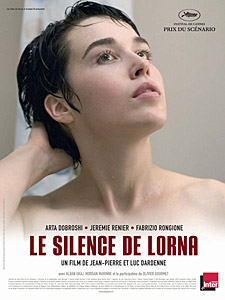 Le Silence de Lorna (2008, Directors: Jean Pierre Dardenne and Luc Dardenne): Sadly, once again I come to the work of acclaimed filmmakers with no previous experience of their work. The Dardenne brothers have been mining their own seam for many years now, exploring the lives of the poor, unglamorous and desperate in unfussy realistic films. Their latest provoked polarizing reactions at Cannes this year, where some found it stylistically too similar to their previous work, or thematically too much like other films about the intersections of the old and new Europe. Luckily, I wasn’t carrying that baggage.

Lorna (Arta Dobroshi) is a young Albanian woman living in Belgium whose dream is to one day open a snack bar with her boyfriend Sokol. In order to be eligible for bank loans and other benefits, she enters a marriage of convenience with a heroin addict to gain her citizenship. We quickly learn, however, that this is only a small part of a larger, darker scheme masterminded by a local small-time hood named Fabio. Both Lorna and her husband Claudy (Jeremie Renier, a stalwart of the Dardennes’ recent films) have been paid, with the understanding that Lorna will divorce Claudy as soon as she gains her citizenship so she can remarry a wealthy Russian, allowing him to obtain citizenship as well. At least that’s what Claudy thinks. But Fabio’s plan is to stage Claudy’s death from a heroin overdose instead. Will Lorna go along with this deception? At the beginning it appears that she will. She and Claudy live under the same roof, but keep separate rooms and there is little in the way of sympathy. But when he decides that he wants to kick his habit and begins begging her for help, Lorna’s attitude slowly begins to change. After a successful hospital stay, he is released and his relationship with Lorna seems to enter previously unknown territory. The plan is in jeopardy because people who started off using each other start to feel connected. Fabio, meanwhile, is desperate to complete the deal with the Russian at all costs.

Dobroshi is in almost every frame of this film and she is wonderful, showing a single-minded stoicism punctuated with some unexpected outbursts of emotion. Remarkably, despite the dehumanizing aspects of the scheme, it’s one Lorna entered into willingly, and at no point is there any sexual exploitation. In fact, when sex does enter the picture, it’s as an expression of rebellion and of passion, and it throws the whole greed-fuelled plan into disarray. She soon comes to realize her powerlessness and expendability and by the end of the film, her dreams have been replaced with a desperate desire simply to survive. Along the way, though, this solitary and determined figure becomes more alive and less alone, even as her carefully-ordered life loses all of its stability. If this is minor Dardennes, I can’t wait to catch up on the major stuff.

This entry was posted in Film Festivals, TIFF and tagged #tiff08, belgium. Bookmark the permalink.