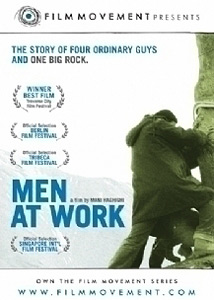 Kargaran mashghoole karand (Men At Work) (Director: Mani Haghighi, Iran, 2006): Kargaran mashghoole karand (Men At Work) begins with four middle-aged men driving home to catch an important football match on television. Three of them are talking and joking around while the other naps. He wakes up and bugs them until they finally pull over and allow him to make a pit-stop on the side of the road on the edge of a canyon. While they are stopped, they discover a tall, narrow rock formation sticking out of the ground. This film is about their attempts at trying to figure out how it got there, but ultimately how to knock it down.

It doesn’t sound like a very intriguing story, but somehow it is. And funny. The situation these men impose upon themselves can surely be a metaphor for any kind of obstacle that one may face in life, or it could really just be about how difficult it is to dislodge a big rock from the earth.

Through alternating moments of silence, comedic and almost slap-stick antics, emotional outbursts and acts of desperation, we learn of these mens’ relationships with women (two of whom conveniently show up, join the challenge for a while, and then leave) and each other, but mainly we see how differently they each deal with this “problem.”

I have seen a few Iranian films from the past few years, and most of them are about women and their struggles within their culture. This film, however, may focus on the possibly neglected point of view of the men, and perhaps this is why the offensive rock is quite, well, phallic. Is this a commentary on the different attitudes that some Iranian men may have about their male-dominated society? If so, then how does one explain the relatively passive attitudes of the women who show up? (One can make a metaphor of anything, I suppose.)

In the end, after periods of working together and then literally giving up and leaving someone behind, the four friends learn that sometimes problems can solve themselves.