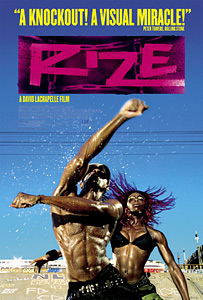 Rize (Director: David LaChapelle, USA, 2005): David LaChapelle is mostly known for his photography and music videos. If you haven’t seen this documentary film, then you’re probably not familiar with clowning and krumping, a dancing subculture in Los Angeles.

The film looks at the dance movement known as clowning which was started in south central LA by Tommy The Clown. Tommy took a job dressing up as a clown to entertain kids at birthday parties in the hood. He incorporated dance into his show and krumping was born.

In the film Tommy drives around in his green 5.0. Now, how can you not like a guy like that drives a green Mustang, dresses up like a clown and creates an entire dance movement?!

The dancing in this film is incredible. The music is also great and you’ll want to jump off the sofa and bust a move but don’t. You’ll just look like an idiot.

Do rent this film. It’s extremely entertaining and you’ll thank me for the recommendation later.